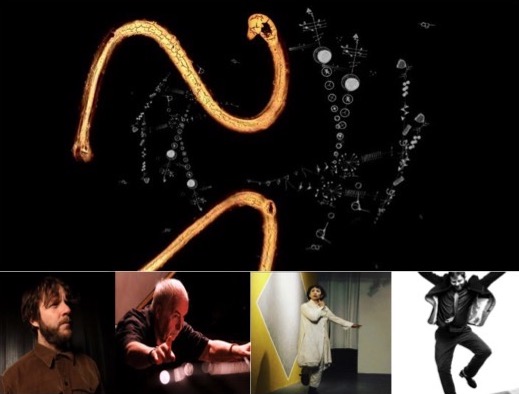 END_OF_DOCUMENT_TOKEN_TO_BE_REPLACED

Billy Martin was born in New York City in 1963 to a Radio City Rockette and a concert violinist. At age 17, he dove into Manhattan’s thriving musical landscape. Throughout the 1980s, he honed his craft everywhere from Broadway orchestra pits to Brazilian nightclubs and burgeoning underground performance spaces.

From the roots of the downtown scene he emerged with Medeski, Martin, and Wood, bridging the harmonic complexity of jazz, the conversational fluency of free improvisation, and the groove and swagger of classic R&B and funk. A series of albums and high-profile collaborations with John Scofield, John Zorn, Iggy Pop, Natalie Merchant, and others brought the band international acclaim.

Throughout his career, Martin has written and performed in a variety of contexts, including free improvisation, chamber compositions, and film scores. He runs the independent label Amulet Records, through which he has released a number of genre-bending albums such as the Road to Jajouka series, which features collaborations between the Master Musicians of Jajouka and guest artists including Ornette Coleman, Flea, Marc Ribot, John Zorn, Lee Ranaldo, Bill Laswell, Mickey Hart, Medeski, Martin, and Wood, among other acclaimed artists.

In addition to his musical pursuits, Martin is also an accomplished filmmaker and visual artist. His film Life on Drums is a cinematic exploration of percussion and the creative process. His work in the visual arts has been exhibited in installations around the world, including the 2014 Cartegena de Indias Bienal in Colombia and the 2015 Drawing Sound series at The Drawing Center in New York City.

As part of his exploration of the visual arts, Martin has produced innovative “visual scores” which guide musicians and dancers in improvisational contexts, informing their sound and movement through aesthetic impressions.

Today, Martin serves as the President and CEO of the Creative Music Studio (CMS), the storied nonprofit organization founded by Ornette Coleman and Karl Berger in 1971. The organization runs workshops that help musicians from all backgrounds and of all skill levels cultivate their improvisational playing. In this role, Martin also oversees performances by the widely acclaimed CMS Improvisers Orchestra (CIO), the organization’s flagship performance group. The orchestra features a rotating cast of over 100 professional musicians representing a diverse array of traditions and styles, which enables CIO to produce bold, new sounds in one-of-kind contexts. Among CIO’s most recent accomplishments, the group received a residency at the Stone in New York City which featured John Zorn as a guest artist and collaborator.

Visual Score by Billy Martin with music by iOOi a collective of improvisers.

This original visual score by Billy Martin served as a prompt for the experimental quartet iOOi, who contributed a spontaneously composed score to the footage. Martin’s visual score concept will function as the guiding creative framework for the upcoming production “Organism.”