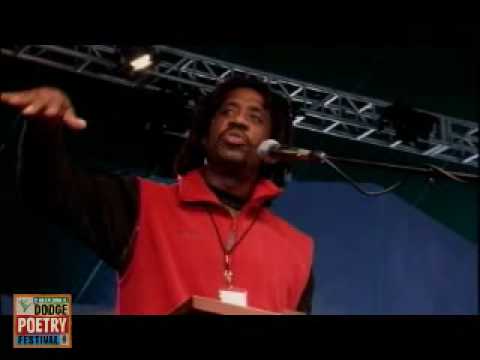 Kurtis Lamkin is a poet from Philadelphia who plays the kora, a beautiful West African harp/lute. He has performed nationally at venues such as the Dodge Poetry Festival, Lincoln Center, The Bumbershoot Festival, and the Gullah Festival in Charleston South Carolina.

He has several cds, the latest of which is Kora Poems. His animated poem The Foxes Manifesto, about the 1976 Soweto Rebellion, aired for two years as a short on PBS. Many of his poems have been published in magazines and anthologies including Ebony Man, Crazy Horse, Elements of Literature, Long Journey Home, and Bill Moyer’s "Fooling With Words" book and documentary.

"Psychic Lover" a dance concert he produced at The Victoria Theater in Harlem is one of several dance/poem/music projects he has worked with over the years. He has also performed with several African Dance troupes and with Tap Dance ensembles. Most recently he performed a suite of duets with the great  tap dancer Maurice Chestnut at The New Jersey Performance Arts Center.

Kurtis Lamkin is currently a 2013/2014 Fellow with the Jubilation Foundation. He has recently developed a new string instrument called the jinjin, which he plays on his latest recording project Big Fun.

Kurtis Lamkin performs kora poem “You Boss” as a part of a documentary with the Fetzer Institute.