Some press for 15 Photos

“darkly moving”
“seemed to mine the depths of every vocalism Pinto was capable of producing. From plainly spoken chant-like text to low grunts and guttural growls, a belty pop-tinged melody, and high-pitched screeches, 15 Photos utilizes every aspect of vocal production.”
-I Care If You Listen

“Pinto’s 15 Photos pushes the extreme vocalism of Eight Songs for a Mad King even further, with timely texts that resonate with contemporary audiences.”
-Jennifer Hambrick, WOSU

15 Photos is a song cycle for movement and voice with supporting drones. It’s a malleable set: any voice type, any combination of the songs, any accompanying drone instrument. Inspired by the desire to compose a companion piece for Maxwell Davies’ Eight Songs for a Mad King, the project spawned from some portraits by Aleks Karjaka of various parts of my body that felt discomfort or made me feel uncomfortable. The words and movement are inspired by poems, stories, essays and improvisations on aging, masculinity, medieval epics, death and love. I don’t know where the title came from since there are not fifteen photos in the series, nor are their fifteen songs in the cycle.

With characters from Arthurian, Anglo-Saxon and Arabic epics, the songs are performed as a theatre for voice, movement and lighting.

The text draws influences from Gawain and the Green Knight, Beowulf, The Travels of Ibn Fadlan, the #MeToo movement, The Buried Giant, Eight Songs for a Mad King, Nennius’s Histories and Mary Douglas. The movement is drawn from the physicalization necessary to produce those extended techniques and based on a series of poses and rigorous motions highlighting specific parts of the body, and shapes in silhouette and shadow. The music draws from a massive five-octave palette of techniques to enhance the tension, struggle and beauty of the written vocal melody and meditative drone: sometimes hitting 300 words per minute, sometimes grounded in slow, poignant multiphonics, whistle tones and vocal fries.

In May 2016, I first performed the part of King George III in Peter Maxwell Davies’ 1969 composition Eight Songs for a Mad King, and this exploration into the Roy Hart school of extended vocal techniques and the physical positions helpful to produce these sounds. Roy Hart technique is beautifully democratic to me: these sounds are innate to the human body and anyone can learn them by “unlearning” blockages. That concept (along with the fascination of linking choreography to the performance of the production of sound) spurred an interest in writing my own set of etudes in extended techniques, able to be programmed alongside Mad King, and performed by singers of all styles, genders, and training.

Commissioned in part by the 2018 Resonant Bodies Festival, a few movements were performed at the Dear Himalaya Festival in Chiang Mai, Thailand in February 2018. The 15 Photos were “premiered” (some with electronic drone, others with small instrumental ensemble) in September 2018 at Mt. Tremper Arts, Roulette (Brooklyn), Columbus Performing Arts Center (Ohio), and Denison University (Ohio).

Future performances and the published scores will be announced soon.

These songs are dedicated to my wife, Amanda Pinto. 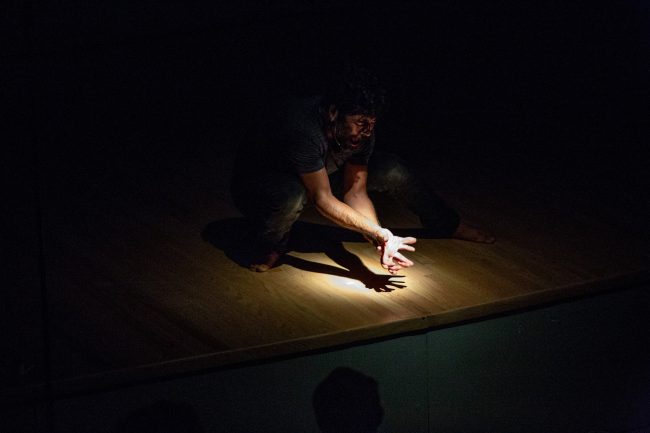 Composer Paul Pinto creates, performs and produces experimental music and theatrical works, primarily focused innovative and engaging new form of opera-theater that fuse the musicality of American speech, poetry, classical music, extended vocal techniques and electronic sound art. He is a founding member of the acclaimed collectives Varispeed and thingNY, and his music has been performed across…