Four American composers will each write a new work for saxophone and piano, 6-12 minutes in length, using soprano, alto, and baritone saxophones. David Clay Mettens’ Passacaglia will first be premiered in Taipei and Osaka (January 2017), joining the other commissions on concert tours to Florida, George and the Northeast (April and November 2017). The tour program will feature two additional 21st-century works—David Reminick’s Gray Faces and Jonn Sokol’s Palm, commissioned by Phil Pierick in 2013.

Bloom (Blume)  is a piece that explores whimsy and hesitant development. The initial motive, played by the saxophone, can barely be heard at the beginning of the piece. Though this motive is developed and comes to return mid-piece, it quickly spins off into unexpected directions. We often hear only a light sketch or will-o-the-wisp before the material quickly moves on to a new idea. The relationship between the instruments is just as fleeting – they struggle for a dominant role, often becoming deeply entwined. Though the material and duet relationship develop throughout the piece, it ends without a firm conclusion, reflecting instead the ephemeral nature of life itself.

Lately, my work and thoughts have drifted through a constellation of ideas that only partially overlap: memory, retroactivity, reflex-like agility, difference/repetition, etc. I’ve started to realize that—paradoxically—if there is anything tying these ideas together, it’s something like Wittgenstein’s notion of family resemblance: the ungoverned field of resemblances between family members, and the illusion of an underlying common essence. I envision this piece as an exploration of familial resemblance—a meditation on how fields of meaning emerge and decay, beyond expectation and surprise, like sitting on a train looking backwards, tripping, twice.

crown-snow is a duo for baritone saxophone and piano with tape. It is a delicate work that layers lightly-prepared piano, resonant chords, soft multiphonics, and altissimo-register lyricism in silhouettes of live sounds and electronics. Like many of my works, a childhood memory from my Vermont upbringing moved me to write this piece: mountaintop pines that become so layered with snow and ice rime that you see only traces of the trees you know to be there, and, in their place, you see a forest of luminescent statues standing before you.

My Passacaglia is based on a repeating sequence of multiphonic dyads rather than a ground bass or harmonic progression. The saxophone’s stark two-part counterpoint unfolds first as the shadow of dramatic accented piano chords, becoming obscured over the course of the piece. Eventually abandoning the literal sequence of multiphonics, the saxophone continues to ornament their harmonic framework. The piece concludes with a final repetition of the sequence clouded by opaque piano murmurings, completing the gradual transition from transparency to murkiness.

“SPP” by Philippe Leroux
Like this? Login or register to make a playlist of your favorites pieces.
Features: Phil Pierick, Kurt Galvan

This setting of Mary Kaiser poem explores contradictions between opaqueness and clarity, tangible experience and insubstantial memory, and inky, black night and morning light. The ensemble begins in a homogenous, blended mass. Individual instrumental strands emerge as the singer begins to question the solidity of the vision she describes. After the dreamy haze completely dissipates, the ensemble reforms into a new kind of homogeneity: a single melodic line punctuated by chimes unfurls during the speaker’s final reflections.

“Crónico” is a meditation on the multifaceted nature of repetition, both as a perceptual phenomenon and as a musical expression. Ethereal sustaining timbres alternate with glitchy groove sections in this exploration of repetition.

A staunch advocate for new music, saxophonist Phil Pierick has commissioned more than twenty-five new works and presented over fifty premieres in France, Germany, Austria, Canada, Taiwan, Thailand, Malaysia, Singapore, and the United States. Recent recording projects include an album of previously unreleased chamber music for saxophone by Percy Grainger (Naxos), an entry in the… 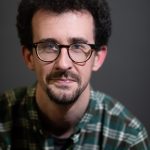