A live performance/construction site swirling movement, wood, live music, and tap dance into a visceral experience of a delusional brain. 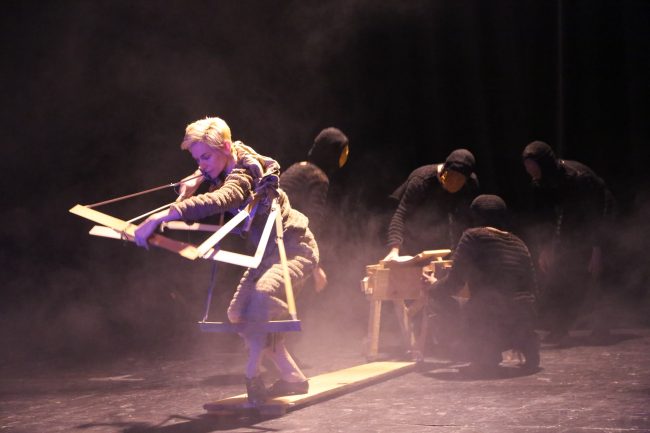 We’re pleased that TILT has been selected as one of 10 dance productions to be included in the 2019 American Dance Abroad Pitchbook. View the Pitch book here.  TILT is available for touring; please contact us for more information and our tech rider. (photo by Olek)

Posted on August 7, 2019 by Racoco
Like this? Login or register to make a playlist of your favorites pieces.

Rachel Cohen’s Tilt, a world premiere presentation of Racoco Productions at the Abrons Arts Center of the Henry Street Settlement on the Lower East Side, was 80 minutes of creative genius, slow moving at times, but always fascinating.

The Experimental Theater Space at the Abrons, a not particularly large black box, was turned into a complex construction site by the Tilt creative staff, a truly unique interactive set.  Above the audience hung a crooked runway along which a ball was occasionally mysteriously rolled.  The ball eventually hit some metal gongs and went on to roll down a Rube Goldberg like contraption and onto the stage floor.

A multi-layered structure occupied stage left. (Set design by Bill Kennedy whose mastery of space was phenomenal.)  In the front of this room-like sculpture was a little porch on which a tap dancer, Heather Cornell stood, only her lower body in view, almost continually performing tap steps on a tiny square of floor during the entire length of the show.

From the top of this box slowly emerged a woman, the quietly intense Rachel Cohen dressed in a two-piece grey crocheted outfit (inventive costumes designed by Olek).

After tossing pieces of wood onto the stage, she lowered a ladder, descended and began an adventure too complicated to describe except to say that the spirit of Cervantes’ Don Quijote was evoked, climaxing with a sensational battle with a windmill ingeniously assembled right on the stage by four dancers in black wearing mesh masks.

These four—Toby Billowitz, Remi Harris, Masumi Kishimoto and Meghan Schardt—act as a combination of Greek Chorus and Bunraku Puppeteers, constantly taking all the tiny pieces of Kennedy’s intricate set, reassembling them and re-reassembling until their purposes were exhausted.  A hanging wooden effigy became in turn Don Q’s armor, a dancing puppet (held up by the four dancers) and an ominous image of death pursuing the main character.

A chair, when disassembled morphed cleverly into a flying horse for Ms. Cohen, her wings formed by flexible triangles that later were repurposed as the blades of the windmill with which the epic stylized battle is fought and lost.

When Ms. Cohen’s Quixote appeared to lose everything and the set seemed to fall to pieces, Ms. Cornell emerged from half-view to begin the work da capo, descending from the set’s attic via the same ladder, her quietly tapping, scraping, stomping feet moving the detritus of the set about, reanimating the Don Q story, again pursued by the devilish chorus of four leading to a quietly satisfying ending.

Ms. Cohen’s choreography was slow and deliberate, emphasizing angular arm movements and gestures, all performed to the moody music created by Lynn Wright who played guitar and Ableton* along with Eric Eble (double bass), Nikki D’Agostino (woodwinds) and Eric Hoegemeyer (Ableton* and percussion).  The ambiance created by Ms. Wright’s score was eerily otherworldly.

Jon Harper’s lighting found every nuance in the set and the performers.

The title Tilt referred to a pinball machine as a metaphor for the inner workings of one’s head.

*An electronic device that produces sounds.

TILT is a visceral, brash, and humorous dive into the brain of a woman struggling to maintain her sanity. A swirl of movement, wood construction, tap dance, live music, and dreamlike imagery from Cervantes’ “Don Quixote” creates a textural maze of a world where Cohen and Cornell face off in a visual and aural battle between the specter of delusion and the voice of reason.

An innovative collaboration, TILT will surprise and delight audiences of all ages, blending Cornell’s precision, musicality, and clarity with the visual chaos and raw emotion of Cohen’s textural worlds and the pervasive melodies and atmospheric gestures of Wright’s palpable soundscape. Cohen/Wright’s most ambitious project to date, it’s the first time we’ve invited a performing collaborator of Cornell’s caliber to meet us in creation and is a leap into the unknown for Cornell. Cornell is the perfect bridge between our mediums, the music literally playing through her body. It is a thrill to learn each other’s languages and find a common parlance; we are excited to share this uncharted journey with audiences over an extended run.

“TILT” emphasizes the contrast of the imagined and the real by juxtaposing choreographed and improvised elements. The performers build and dismantle tenuous wooden constructions that increasingly clutter the stage, representing the protagonist’s shifting perspective. We create a storyline, score, and movement template in rehearsal – the imagined – but all must adapt in real time to the changes onstage as the wood behaves unpredictably. The audience sees our efforts to hew to the “script” and our decision-making process when we fall away from it; not a perfect product, but the beauty of imperfect striving – the real.

Wright’s score weaves composed, cinematic melodies and discordant punctuations made from prerecorded sounds that are manipulated until the source is almost obscured. Cornell brushes against these worlds in improvised duets with each musician – dancing on wood, sand, metal  – responding unscripted to the stage action, a return to the grounded, immediate present. The vibrating tensions viscerally evoke the tempest of thoughts in a mind clouded by delusion.

Closer
Like this? Login or register to make a playlist of your favorites pieces.
Features: Lynn Wright

Taps and Traps
Like this? Login or register to make a playlist of your favorites pieces.
Features: Heather Cornell

In Taps and Traps, tap legend Heather Cornell and Canadian percussionist Jesse Stewart weave a spellbinding tapestry of textures of sound and movement, creating a sense of wonder and curiosity in the minds of listeners. Recorded February 10, 2018 at the Ottowa Winter Jazz Festival. At 2’45”, Cornell makes sand sing, with sensitivity and exquisite timing.

Racoco Productions fuse raw materials with absurdist visuals, quixotic choreography, and original music to transport audiences to uncanny worlds that viscerally reflect the messy, humorous, sublime nature of our existence. The company collaborates with other artists (performers, composers, musicians, visual artists) to create live performances that touch viewers through the mind and a deeper, more primal…