Alturas Duo explores the American voice with a new piece by Gwyneth Walker for its Vox Americana series of concerts and recordings.

Working with the Composer is Always Fun! 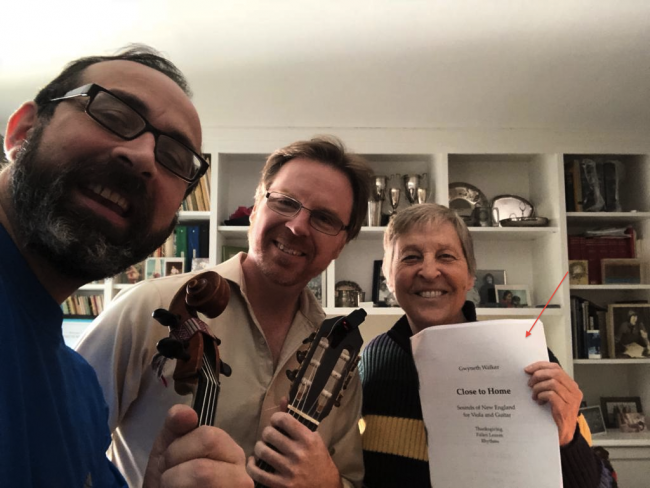 As the premiere of Gwyneth Walker‘s Close to Home: Sounds of New England nears, violist Carlos Boltes and guitarist Scott Hill have been having a grand time with the composer while prepping to bring the piece alive on Sunday, February 10th in Westport, CT at the Connecticut Guitar Festival.  Thought we’d share the delightful fun! (see the score!)

Posted on February 4, 2019 by Alturas Duo
Like this? Login or register to make a playlist of your favorites pieces.

Hope you enjoy this little preview!

Vox Americana is a series of programs intended to bring together music commissioned or written specifically for Alturas Duo (Carlos Boltes and Scott Hill). With its unusual combination of viola, charango, and guitar, Alturas Duo creates spirited, passionate programs that move with ease between the European Baroque and South American melodies and rhythms learned through the oral tradition. Our quest for new musical experiences and to broaden the repertoire has led to exciting performances with a range of diverse artists to collaborations with numerous composers from North and South America. While we have premiered 50+ compositions over the past 17 years, we have never been specific in our requests or narrowed our focus to a region or country. Each piece has evolved out of friendships, a project being worked on at a particular time, or has arrived through fortuitous happenstance. In reviewing this body of work, there is recognition that this repertoire should be documented in recordings.

The first collection of recordings in our Vox Americana series is to be an album featuring the wonderful, yet highly underused sonority and timbre of the guitar and viola. It is a project of gratitude, a way of saying thank you to the United States and opportunities it has provided for us as immigrants. An essential conceptual element in this first collection of works is the representation of composers who have made the United States their home as well as those born here, and to include a group of people of divergent backgrounds. Up to this point, we have collaborated with Russian, Japanese, and Cuban-born American composers as well as citizens from the United States and Puerto Rico.

When commissioning a piece, it is first and foremost that we like a composer’s writing. In 2013, violist Carlos Boltes had the fortunate opportunity to perform in the premiere of renowned American composer Gwyneth Walker’s To Love This Earth for chorus, solo baritone, clarinet, and string quartet. This impressionable piece stuck with Carlos, so turning to Gwyneth Walker to compose a new piece for viola and guitar was an immediate natural first choice. Thankfully, she has agreed to work with us to compose something especially “American” to provide contrast for our tendency for Latin American influenced works. As Dr. Walker states, “perhaps New England in nature,” given that Alturas Duo has made Connecticut its home for nearly two decades.

As with all music Alturas Duo premieres, this new piece by Gwyneth Walker will be included in our repertoire for the 2018-19 concert season, allowing us to really obtain an intimate familiarity with the work prior to recording it for inclusion in the Vox Americana debut collection. The work will be premiered in a concert program entitled Vox Americana for the Connecticut Guitar Society in its 2018-19 season, receive numerous performances on chamber music series, on university campuses, and community outreach programs, and exemplify for our various audiences the talent of contemporary American composers as well as the little used instrumentation of viola and guitar.

Pájaro sin plan de vuelo (Bird Without A Flight Plan) by José Manuel Lezcano
Like this? Login or register to make a playlist of your favorites pieces.
Features: Alturas Duo

Paying homage to Chilean folk icon, Violeta Parra. Listen for extended techniques (harmonics, South American strumming, blowing air into the guitar, and ponticello on the viola) and references to Chilean folk music like “Cueca” rhythm as well as pieces by Parra; “Gracias a la vida” and her famous “Anti-cuecas.”

In purple, in blue (2015) by Maxim Vladimiroff (a Russian’s interpretation of American music)
Like this? Login or register to make a playlist of your favorites pieces.
Features: Alturas Duo

When the Spirit Sings for string trio, 1st movement | Commissioned & Premiered by Musica Harmonia
Like this? Login or register to make a playlist of your favorites pieces.
Features: Gwyneth Walker

Gwyneth Walker has the uncanny ability to bring the 20th century ”American Sound” (Copland, Ives, Bernstein, etc.) while making it her very own. She brings a sensitivity to the blending of folk traditions and concert music. This sample exemplifies her writing for strings. Although Walker has not written a great amount for guitar* , her works with guitar clearly demonstrate an ability to do so with finesse.

Praised by The Washington Post as playing with “marvelous virtuosity,” Alturas Duo is recognized as one of the most engaging ensembles performing chamber music today. Bringing together the worlds of South American folk, western classical, and contemporary music; guitarist Scott Hill and violist and charango player Carlos Boltes have performed throughout the United States, Canada,…