And so the heavens turned

Posted on February 2, 2020 by Momenta Quartet

On Friday February 7th, we’ll repeat our Roulette program – this time at Bard College, where Lothar Osterburg is an Artist-in-Residence.

Posted on December 2, 2019 by Momenta Quartet

We’ve been hard at work preparing for our Dec. 5th show at Roulette, presented by the ever-adventurous Interpretations series, now in its 31st season. Here are a couple of recent candids from rehearsal: photos of Momenta working with composer Frances White on “The Book of Evening” for shakuhachi and string quartet (featuring shakuhachi master and fellow featured composer Elizabeth Brown!), as well as “And so the heavens turned” for string quartet and narrator (featuring Interpretations founder/director Tom Buckner reading the text by James Pritchett). Catch these two works, plus much more, on Dec. 5! And check out our recent listing in the New Yorker‘s “Goings On About Town” section.

Here is a short preview of BABEL, for quartet, soundscape and video, performed by Momenta…please join us for the premiere on December 5th at Roulette!

Earlier this month, we received the final versions of the two works of Frances White that are to receive their world premieres on December 5: “And so the heavens turned”, for string quartet and narrator (with text by writer James Pritchett, featuring narrator Thomas Buckner) and “The Book of Evening,” for shakuhachi and string quartet (featuring shakuhachi master Elizabeth Brown). We look forward to exploring these works and preparing for the December 5 concert on Roulette’s Interpretations series.

Another exciting piece of news is that we have confirmed the second performance of this intensely varied and eclectic program: Friday, February 7, 2020 at 7:30pm at Bard College’s Blum Hall.

Stay tuned for further updates on the rehearsal process! 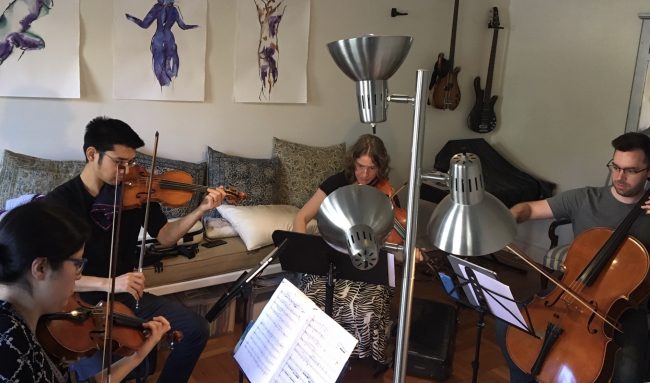 Here’s an action shot from our recent rehearsal of Elizabeth Brown’s score to “Babel,” featuring string quartet and pre-recorded soundscape–to be experienced by our audience in collaboration with a sculpture installation by renowned artist Lothar Osterburg. Don’t miss the full show on the “Interpretations” series at Roulette in Brooklyn on December 5, 2019. Future concerts to be announced soon as well!

We have received the final score for Elizabeth Brown’s string quartet portion of “Babel”: the multimedia collaboration between Brown and sculptor Lothar Osterburg that will form the centerpiece of our project. Momenta is excited to add this piece to our growing list of unique personal repertoire. Stay tuned for clips and pictures from upcoming rehearsals!

We have a date! “And so the heavens turned” will premiere in NYC at Roulette in Brooklyn on Thursday, Dec. 5, 2019 at 8pm as part of the “Interpretations” series. Stay tuned for more updates as the project continues to come together this year!

Posted on December 7, 2018 by Momenta Quartet

We are thrilled to announce that our multi-disciplinary project “And so the heavens turned” has been awarded a very generous grant by the Sparkplug Foundation. We are honored to have been selected alongside so many compelling projects, and are grateful to be able to add Sparkplug alongside New Music USA in our list of funders for this ambitious undertaking. Check out the other Sparkplug grantees here.

Our project is slated for a December 2019 premiere at Roulette in Brooklyn, NYC on the intrepid Interpretations series (the 30-year-running brainchild of baritone, improviser, and downtown new-music fixture Tom Buckner). Tom himself will be joining Momenta as narrator in our title piece: Frances White’s “And so the heavens turned”, reading text by writer James Pritchett. Stay tuned for news about the concert date and other updates!

Brown and White get to work

Posted on June 25, 2018 by Momenta Quartet
Elizabeth Brown’s and Frances White’s new pieces for Momenta are underway! Both pieces will be premiered December 2019 on the Interpretations series at Roulette in Brooklyn.
For her Babel soundscape, Elizabeth has gathered voices from Egypt, Tunisia, Palestine, Jordan, Israel, Mexico, Peru, Argentina, Japan, China, Korea, Germany, England, and Spain, as well as accents from across the the United States.
Frances’s new piece for string quartet and shakuhachi is inspired by Mark Strand’s beautiful poem:
“Moon”
Open the book of evening to the page
where the moon, always the moon, appears
between two clouds, moving so slowly that hours
will seem to have passed before you reach the next page
where the moon, now brighter, lowers a path
to lead you away from what you have known
into those places where what you had wished for happens,
its lone syllable like a sentence poised
at the edge of sense, waiting for you to say its name
once more as you lift your eyes from the page
and close the book, still feeling what it was like
to dwell in that light, that sudden paradise of sound.

The Momenta Quartet joins forces with composers Elizabeth Brown and Frances White in a multimedia evening fusing Western contemporary music with Japanese aesthetics, literary references, and a video/sculpture installation by artist Lothar Osterburg. This dynamic program is slated for two performances in December 2019 on the Interpretations series at Roulette and at Bard College, featuring Momenta alongside baritone/narrator Thomas Buckner (a fixture of the Downtown new-music scene) and Elizabeth Brown in her equal capacity as shakuhachi master.

Brown and White’s respective sound worlds embrace a sense of beauty and romanticism—inspired by the notion that music, storytelling, and language are intertwined, their combination leading to the most powerful artistic impact. Brown’s quartet “Just Visible in the Distance,” dedicated to Momenta, draws its title, inspiration, and form from W.G. Sebald’s book “The Rings of Saturn.” The piece, inspired by Sebald’s continuous narrative arc, consists of intuitively-assembled small movements, each flowing into the next. White’s “And so the heavens turned” for quartet and narrator, a collaboration with writer James Pritchett, contemplates the mystery of storytelling itself. Pritchett’s text, inspired by the 11th-century Persian epic “Shahnameh,” is read before the music and during its closing, evoking at times the anguish and passion of the epic’s mythic lovers, at others a questioning stillness. Past mythology comes into full play in the world premiere of “Babel”, a multimedia collaboration between Brown and Osterburg using music, video, electronics, and sculpture to celebrate NYC as a living organism. Momenta is spaced around Osterburg’s monumental interpretation of Babel, covered with pages from discarded books in a multitude of languages. Brown’s collected recordings of Emma Lazarus’s verse from the Statue of Liberty, read in English in a multitude of accents, form the soundscape’s center. In this positive version of Babel, nothing is destroyed; instead, it is cumulative, with its architectural history visible, its constant influx of immigrants the source of its life and beauty.

The spiritual and sonic qualities of the shakuhachi tradition, with its delicate timbre and poetic expression lending itself to musical storytelling, bring two world premieres to this concert. Brown’s “Dialect” for solo shakuhachi uses repeating, morphing phrases to trace the evolution of a unique language. White’s “The book of evening” for quartet and shakuhachi is drawn from Mark Strand’s beautiful poem “Moon,” picturing the moon appearing between clouds. The music reflects this as a sonic image, the shakuhachi surrounded by the strings’ musical “clouds.”  Strand’s moon creates a path to “those places where what you had wished for happens.” The music evokes longing for that place, vanishing as the book of evening closes.

Momenta’s exploratory philosophy has led to countless collaborations with dance, film, drama, and non-Western instruments. This multidisciplinary project–intertwining strings and shakuhachi with sculpture, video, electronics, narration, and cross-cultural narratives–highlights the importance of upholding inclusiveness and diversity, no less in this fraught day and age. It marks a decade of collaboration between Momenta, Brown and Osterburg, and the important addition of White’s works to Momenta’s unique personal repertoire.

Elizabeth Brown: Piranesi for theremin, string quartet and video (2007/12)
Like this? Login or register to make a playlist of your favorites pieces.
Features: Momenta Quartet, Elizabeth Brown, Lothar Osterburg

“Piranesi” is a collaboration of composer/thereminist Elizabeth Brown and her partner, photogravurist and filmmaker Lothar Osterburg, in homage to the exaggerated architectural world created by master printmaker G. B. Piranesi (1720-1778) in his Carceri (etchings of imaginary prisons). Brown’s score, blending string quartet with the theremin’s unearthly voice, is combined with Osterburg’s miniature models and stop-motion animation capturing his own unique artistic process. Performed live on 10/1/17 at Momenta Festival III (Dixon Place, NYC).

And so the heavens turned

This is an excerpt from “And so the heavens turned”, for string quartet and narrator, performed by Maya Bennardo, Sabina Torosjan, Liuh-Wen Ting, and Kate Dillingham. The text is by James Pritchett (text is available on the SoundCloud page).

“And so the heavens turned” is about both story and storyteller. The story is from the ​Shahnameh​ (​The Book of Kings​), the 11th-­century Persian epic written by Abolqasem Ferdowsi. The stoyteller is Mohammed Habibian, who introduced us to the “Shanameh” and other works of Persian literature.

Elizabeth Brown: Mirage for shakuhachi and string quartet (2008)
Like this? Login or register to make a playlist of your favorites pieces.
Features: Momenta Quartet, Elizabeth Brown

“Mirage” is one of a series of Brown’s pieces combining shakuhachi with Western instruments; the two musical traditions exchange ideas and language in a series of scenes which emerge and then dissolve. This is a live performance by Brown and the Momenta Quartet at Brooklyn Conservatory in 2012.

Momenta: the plural of momentum – four individuals in motion towards a common goal. This is the idea behind the Momenta Quartet, whose eclectic vision encompasses contemporary music of all aesthetic backgrounds. Hailed by the New York Times as a “forward-thinking quartet” with “intriguing programming,” Momenta has premiered over 150 works and collaborated with over…