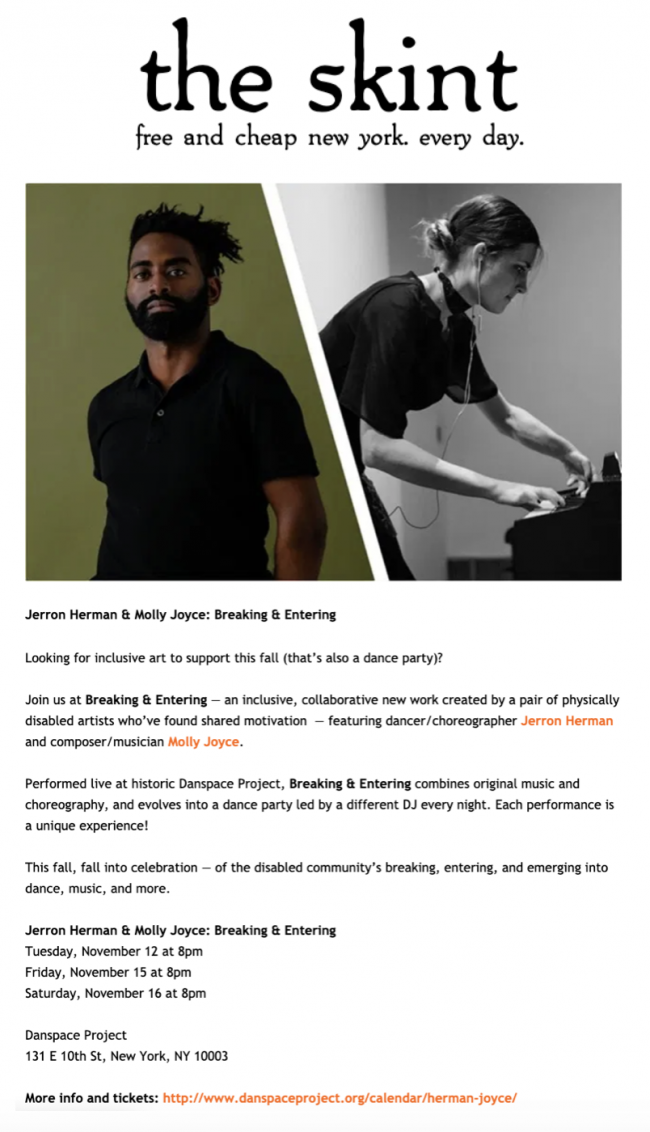 Grateful to The Skint for this preview! Shows coming up next month in NYC 💃💃

Honored to receive an Emergency Grant from Foundation for Contemporary Arts! Funding will assist in sound design for the three performances.

+ DJs for the three shows announced – Kevin Gotkin (Nov. 12), Michael Hammond (Nov. 15), and JIJI (Nov.16)! Each night will evolve into an inclusive dance party to underscore the joy of disability culture: http://www.danspaceproject.org/calendar/herman-joyce/

Jerron previewed our collaboration as part of the Kennedy Center’s REACH Festival this past weekend! Image below + audio track preview for the upcoming premiere. 🎶

“And the choreographer Jerron Herman teams up with the composer Molly Joyce to explore congenital and acquired physical immobility in ‘Breaking and Entering’ (Nov. 12 and 15-16)”

Our collaborative work Breaking and Entering will be previewed on Saturday, Sept. 21 as part of the Kennedy Center’s National Dance Day! Featuring a solo danced by Jerron and new music by Molly — more info.

Our collaborative work Breaking and Entering will premiere at Danspace Project in New York, NY this Nov. 12, 15, and 16!

The work will explore congenital and acquired physical immobility through our parallel weak left sides. Cracking a constrained narrative of disability, our diametric experiences will clash, cohere, and eventually congeal to reveal a dynamic picture of intersection. Featuring sound design by Michael Hammond and video design by Daniel Kim.

Breaking and Entering is a collaborative work between interdisciplinary artist Jerron Herman and composer/performer Molly Joyce, both celebrated artists known for their unique artistry which incorporates their physical disabilities. The work will be an evening-length exploration of immobility through dance and music, challenging traditional notions regarding impairment in the human body and seeking to uncover the creative potential of such. It will be produced with support from The Canales Project, workshopped at venues including The Watermill Center and Performance Space New York, and premiered at Danspace Project in spring 2020.

The work builds upon Herman and Joyce’s initial collaborations, including video Body and Being and live performance Phys. Ed. / aREST / Phys. Ed. BALANCE. Body and Being is a music video produced by The Roof Films, featuring original movement and music by Herman and Joyce which premiered in June 2018. The video features lyrics and music written/performed by Joyce with her voice, vintage toy organ, and electronics, which explores the artistic question of physical loss within the human body, set to original movement by Herman in film shot at The Bronx’s Seton Falls park. The collaboration was an opportune platform for Herman and Joyce to familiarize themselves with each other’s work and process, and continued in November/December 2018 with Herman’s Phys. Ed. / aREST / Phys. Ed. BALANCE at New York’s Gibney Dance Center, utilizing multiple samples from Joyce’s musical work. Both works generated the desire to work further on a more in-depth, longer collaboration.

Furthermore, both artists have unique engagement with physicality in their output. Joyce’s Left and Right video seeks to emulate physical immobility through the combination of text, music, and visual image, while Herman’s Phys. Ed is a meditation and reconstruction of the experience of physical education experience for the disabled body..

Therefore with Breaking and Entering, Herman and Joyce seek to cooperate in a closer way than ever before, specifically in regards to their parallel disabilities. Both artists have weaker left sides — Herman with cerebral palsy and Joyce an impaired hand from a previous car accident. Thus the artistic process and output seeks physical, personal and visceral parallels and departures, in regards to each’s discipline and how their individual disability formed. Herman’s disability is congenital as he was born with cerebral palsy, and Joyce’s acquired from a previous car accident. The work will investigate the potential of a physically silent left side through the complementary yet divergent artistic forms of dance and music, and pursue the common ground between congenital and gained disability. This commonality is sought to find the unique and creative potential, and to shine a light on the vast diversity of disability as a political minority and identity — one that can be born and gained, lost and acquired, and is statistically the largest minority in the US (19% according to the Institute on Disability), yet perhaps the most publicly unacknowledged.

Music video for “Body and Being,” with choreography and dance by Jerron Herman, music composed and performed by Molly Joyce, and produced by Jack Frerer and Liana Kleinman of The Roof Films.

Left and Right
Like this? Login or register to make a playlist of your favorites pieces.
Features: Molly Joyce

Created in collaboration with Olga Stucker, as part of Zürich Academy of the Arts’s 2018 Research Academy. Aimed to explore intersection of lyrical language, physical performance and video documentation for embodying physical immovability, specifically of that pertaining to an impaired left hand.

Phys. Ed
Like this? Login or register to make a playlist of your favorites pieces.
Features: Jerron Herman

Choreographed by Jerron Herman, Music by Randall Woolf. Premiered at Danspace Project, March 2017. A meditation and reconstruction of the experience of P.E for the disabled body.

Molly Joyce’s music has been described as “serene power” (New York Times), written to “superb effect” (The Wire), and “impassioned” (The Washington Post). Her work has presented at TEDxMidAtlantic, Bang on a Can Marathon, and in Pitchfork. She often performs with her toy organ, an instrument that engages with her disabled left hand, and studied at The Juilliard, Royal…