Creative Music at the DIA & Beyond: Celebrating 40 Years of Innovation – Roscoe Mitchell Project

Roscoe Mitchell will compose new work and will perform with A Spencer Barefield Super String Symphonica at the Detroit Institute of Arts.

A. Spencer Barefield’s Creative Arts Collective (CAC), in collaboration with the Detroit Institute of Arts (DIA), presents a major 40th Anniversary Reunion concert series of newly commissioned world-premiere jazz and avant garde music at the DIA, Michigan Opera Theatre, Wright Museum of African American History, Palmer Woods Music in Homes, and workshops with musicians and students.  Funding from New Music USA will be used to commission and present composer/multi-instrumentalist Roscoe Mitchell, founder of the AACM and Art Ensemble of Chicago, to compose and perform new works for and with A. Spencer Barefield Super String Symphonica (wind, string, percussion) at the DIA. The ensemble includes New York’s GRAMMY nominated PUBLIQuartet, Chamber Music America Visionary Award recipients. PUBLIQuartet violinist Jannina Norpoth is Barefield’s daughter. Additional ensemble members include prominent Detroit musicians, drummer Djallo Djakate, Toronto bassist Dave Young, and others. Barefield has performed, toured and recorded extensively internationally with Mitchell for nearly 50 years. The project also includes a workshop and discussion of creative composition and performance, and takes place in Spring 2021 in the DIA’s Diego Rivera Court. Now more than ever, there is a void in support and presentation opportunities for original, cutting-edge, exploratory music with its roots in jazz and African-American music. For decades, Mitchell has been in the forefront of inventing and performing this trailblazing music, and was instrumental in inspiring the musical trajectory of Barefield and other musicians in Detroit and globally. By commissioning and presenting Mitchell, a new generation of musicians and diverse audiences in the Detroit area will have opportunities to experience and be influenced by the power of his musical brilliance. Musicians—both veteran and younger innovators—will work directly with Mitchell, learning and performing works composed specifically for them.

For more than 40 years, CAC, led by visionary jazz guitarist/composer Barefield, has led an impactful journey to create and present artistic avant garde jazz at the DIA and elsewhere in Detroit and internationally—CAC’s 21st century series connects this legacy to the present and beyond. Barefield/CAC has been awarded a Knight Arts Challenge grant for this series, which includes Mitchell’s project.  From 1979-1992, CAC/Barefield’s “Creative Music at the DIA” series presented over 100 innovative concerts of African-American, avant-garde music that were broadcast internationally on NPR’s “Jazz Alive” and “Jazz at the Institute” programs. Artists presented included Mitchell, George Lewis, Lester Bowie, Oliver Lake, Richard Davis, Antony Braxton, Cecil Taylor, Leroy Jenkins, James Carter, Regina Carter, Geri Allen, Anthony Davis, Randy Weston, and many, many others. CAC/Barefield also has presented the 13-year series Palmer Woods Music in Homes (more than 125 concerts since 2007), concerts at the Detroit Jazz Festival, workshops with musicians and students, masterclasses, and free educational children’s concerts. The Roscoe Mitchell project will be free to residents of Detroit and surrounding counties, and DIA admission for others. Audience size will be about 1,000 and many more will be reached by video and audio recordings to be aired on broadcast media and internet. www.spencerbarefield.com      www.publiquartet.com    https://www.arts.gov/honors/jazz/roscoe-mitchell

Roscoe Mitchell and the Sound and Space Ensembles, Linefine Lyon Seven
Like this? Login or register to make a playlist of your favorites pieces.
Features: A Spencer Barefield, Roscoe Mitchell

PUBLIQuartet, Get into the NOW, by Jessica Meyer
Like this? Login or register to make a playlist of your favorites pieces.
Features: PUBLIQuartet 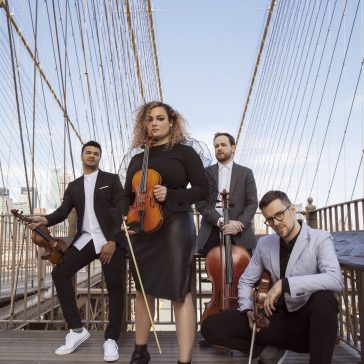