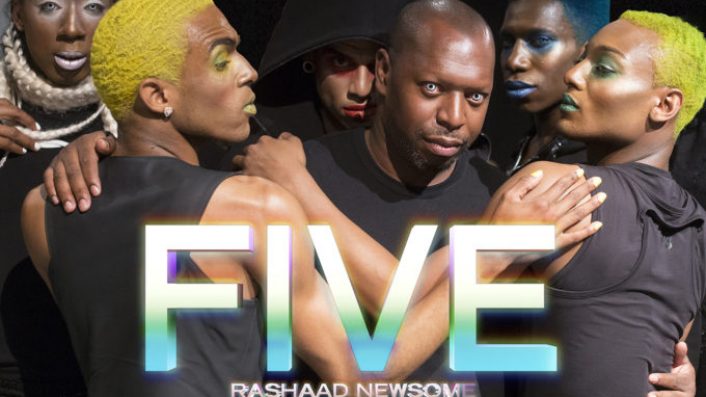 An interdisciplinary project rooted in the vogue dance style, created by the multi-dimensional artist Rashaad Newsome.

Posted on April 13, 2020 by New York Live Arts
Like this? Login or register to make a playlist of your favorites pieces.

BLACK MAGIC’s inaugural presentation began with an exhibition of all new work in collage and sculpture, To Be Real, at PPAC September 12 – November 30, 2019. At the conceptual center of To Be Real, which takes its name from Cheryl Lynn’s 1977 queer anthem, is Newsome’s ‘child’ so to speak, a cloud-based, A.I. humanoid named Being (2019). Being is the first generation of Newsome’s LACMA Art + Technology Lab Grant project. The being’s mind has been populated with the works of radical authors, revolutionaries, and theorists such as Paulo Freire, Michel Foucault, bell hooks, and the like. Being acts as a critical guide to the exhibition, exploring ideas of agency and hegemony within artificial intelligence. Being’s body is represented in the exhibition by a 3D avatar of a humanoid robot. Its torso and faceplates are all African mahogany inspired by the female Pho mask from the Chokwe peoples of the Congo.

Also on view was Ansista, a 3D creation of the neo-cubist figures seen in the more 2D collages suspended in the Vogue dip dance move. Though formally it uses assemblage, the piece is analogous to cubism, which is heavily investigated in many of the exhibition’s works. As a way of queering the subject, the lower body, which is comprised of a lifelike sex doll, is outfitted in drag padding, acrylic nails, high heel boots, and a costume that fuses traditional African and drag ballroom aesthetics. Ansista embodies the very culture that inspired it —an affirmation for femme, womanist, non-binary POC empowerment, which is simultaneously reflected in the surrounding collage work.

As a means of extending the conversation of agency explored within the exhibition, Rashaad Newsome collaborated with Snap Inc., creating custom augmented reality lenses. Visitors of the show were invited to download an App that allowed them to hold their phone up to static works in the exhibition to reveal hidden aspects. The works confronted the viewer head-on, looking back at them, engaging in their own sort of Oppositional gaze. They spoke to the viewer about what they are meant to represent and what they can represent, as well as reciting quotes from bell hooks on the importance of having and using your voice as a form of resistance.  On the occasion of Newsome’s Champion Vogue Ball, he premiered the ‘Get Your 10’s’ lens, a personal lens that allows everyone at the event to feel like a winner.

On October 17, 2019, Newsome in conversation with exhibition curator Jasmine Wahi at the Rhoden Arts Center/PAFA, discussed the entire Black Magic project in two cities and three parts that reflected on Blackness, gender, and futurity. To Be Real then traveled to Fort Mason in San Francisco January 10, 2020 through February 23, 2020 .

Newsome’s installation for the Live Arts’ Ford Foundation Live Gallery lobby wall, opened September 19, 2019, featuring a video and unique lithographs generated from the performance process of the artist’s acclaimed FIVE. An expansion of the digital data captured during his 2016 FIVE SFMOMA, Newsome uses 3D data obtained during the live performance and translates the fierce, spiraling movements of five vogue dancers to the two-dimensional surface of the prints. In collaboration with Tamarind Institute, ten plates were created and printed using traditional lithographic methods. In keeping with his expansive, interdisciplinary method of working, Newsome incorporates three-dimensional printed forms, and collaged images of the dancers’ bodies into each print. The suite included five distinct prints representing each of the five dancers and incorporates a complex layering of performance, ephemeral and recorded movement, and traditional printing and digital technology.

Newsome’s electric performance piece FIVE made its Live Arts and Philadelphia debut at New York Live Arts November 8-9, 2019 and at Icebox November 23, 2019. Featuring local artists in each cast, FIVE is a multimedia performance that abstracts the art of Vogue Femme, a dance form originating from the African-American and Latinx LGBTQ+ community of 1970s Harlem. In the performance, five dancers represent the five elements of Vogue Femme—hands, catwalk, floor performance, spin dips, and duck-walking. As each dancer takes the floor, Newsome uses two Nintendo wii’s to play and manipulate his sound score simultaneously. As he plays an M.C., an operatic vocalist, a black gospel choir, and five musicians improvise an interactive soundtrack, building to a carefully structured crescendo of sound and movement. Using custom made motion-tracking technology, created from a combination of creative coding and video game hardware, Newsome maps the movement patterns of dancers during the live performances and transforms the collected data into digital neoactionist drawings in real-time on a screen above the performance.

FIVE is a multimedia performance that abstracts the art of Vogue Femme, a dance form originating from the African-American and Latino LGBTQ community of 1970s Harlem. In the performance five dancers represent the five elements of Vogue Femme—hands, catwalk, floor performance, spin dips, and duck-walking. As each dancer takes the floor, a hip-hop M.C., an operatic vocalist, a black gospel choir, and five musicians improvise an interactive soundtrack, building to a carefully structured crescendo of sound and movement. Using custom made motion-tracking technology, created from a combination of creative coding and video game hardware, Newsome maps the movement patterns of dancers during the live performances and transform the collected data into digital neoactionist drawings in real-time on a screen above the performance.

Located in the heart of Chelsea in New York City, New York Live Arts produces and presents dance, music and theater performances in its 20,000 square-foot home, including a 184-seat theater and two 1,200 square-foot studios. The mission of New York Live Arts is to keep live arts experiences at the center of a broader conversation about cultural values and the intellectual, aesthetic, and social purposes of art-making. Live Arts is an institution with an unequivocal commitment to supporting the creative identity across all social and cultural strata. We provide much-needed resources to artists at every stage of their careers in a world where access to resources and funding for artists is increasingly inequitable.

Rashaad Newsome is a multidisciplinary artist whose work is deeply invested in how images used in media and popular culture communicate distorted notions of power. Using the equalizing force of sampling, he crafts compositions that surprise in their associative potential and walk the tightrope between inter-sectionality, social practice and abstraction. Newsome’s work in all media opposes cultural essentialisms, leading us into a realm of uncertainty, in which the symbols presented transform, but are nonetheless made tangible. Newsome lives and works in New York City.

Located in the heart of Chelsea in New York City, New York Live Arts is an internationally recognized destination for innovative movement-based artistry offering audiences access to art and artists notable for their conceptual rigor, formal experimentation and active engagement with the social, political and cultural currents of our times. At the center of this…