I am applying for funding to commission 5 distinguished composers to write new works, inspired by “the beautiful game”, for my upcoming GOAT performance and recording project. A diverse group of composers will write pieces for piano (with voice, toy piano, percussion, and electronics) that I will premiere, tour, and then record for my 4th commercially released CD. My debut Reference Recordings album Woman at the New Piano: American Music of 2013 was nominated for 58th GRAMMY® Awards in 3 categories: Best Classical Compendium, Best Chamber Music/Small Ensemble Performance, and Producer of the Year, Classical.

As I did for my previous 3 albums Woman at the New Piano (2014), Quotations and Homages (2018), and The Poetry of Places (2019), I plan to perform the newly-commissioned works over 30 times each in preparation for and promotion of the recording.

The crossover between classical music and high-level sport is pretty unexplored territory. This project will be one of a kind, bringing new classical art pieces to a wider audience.

The composers will start writing their pieces in summer 2019. I will be taking a sabbatical in Fall 2019, which will be dedicated to working with the composers on the new pieces and polishing them in preparation for touring. One of the pieces, by Pamela Z, will be written for voice, piano, and electronics, and I will perform and record this work with the composer herself. I plan to record these new works for a CD of world premieres in Fall 2020 at Skywalker Sound.

This GOAT project will have an impact that is both broad and deep. Deep in that there will be dozens of performances and a culminating commercial recording; broad in that I will engage new communities for this program and will bring major unique repertoire into the international classical music scene.

My previous recording projects were funded in part by organizations such as The Aaron Copland Fund for Music and The Alice M. Ditson Fund at Columba University, among others. I intend to apply for funding from various sources to make this project a reality!

Trailer for Nadia Shpachenko’s “Woman at the New Piano” album
Like this? Login or register to make a playlist of your favorites pieces.
Features: Nadia Shpachenko, Tom Flaherty

This trailer for my album”Woman at the New Piano” features “Airdancing” for piano, toy piano, and electronics by Tom Flaherty, who will also be writing a piece with electronics for my “GOAT” album. “Woman at the New Piano” album was nominated for 58th GRAMMY® Awards in 3 categories, including a nomination for “Airdancing” in the Best Chamber Music/Small Ensemble Performance, as well as nominations for Best Classical Compendium and Producer of the Year, Classical.

Music Video of Harold Meltzer’s “In Full Sail”, a piano piece based on Frank Gehry’s IAC Building in Manhattan, NY, which “gives the appearance of a tall ship in full sail… This piece of music is an attempt to translate into sound not only the quality of the facade, the feeling that everything is bravely in motion, but also what it’s like to be on the streets near it.” (Harold Meltzer). From Nadia Shpachenko’s “The Poetry of Places” album, to be released on March 1, 2019. Meltzer will be writing a solo piano piece for my “GOAT” project as well.

Pamela Z perfomrs “Bone Music”
Like this? Login or register to make a playlist of your favorites pieces.
Features: Pamela Z

Composer and vocalist Pamela Z performs “Bone Music”, a piece she wrote and recorded for her album “A Delay Is Better”. Pamela will be writing a piece for my “GOAT” project that will feature her voice, electronics, and my piano playing. We will perform and record the new work together.

GRAMMY® winning pianist Nadia Shpachenko enjoys bringing into the world things that are outside the box – powerful pieces that often possess unusual sonic qualities or instrumentation. Described as a “gifted and versatile pianist” (San Francisco Chronicle), “one of today’s foremost promoters of contemporary music” (Textura Magazine), and “a great friend and champion of new… 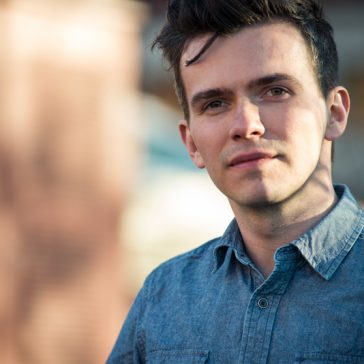