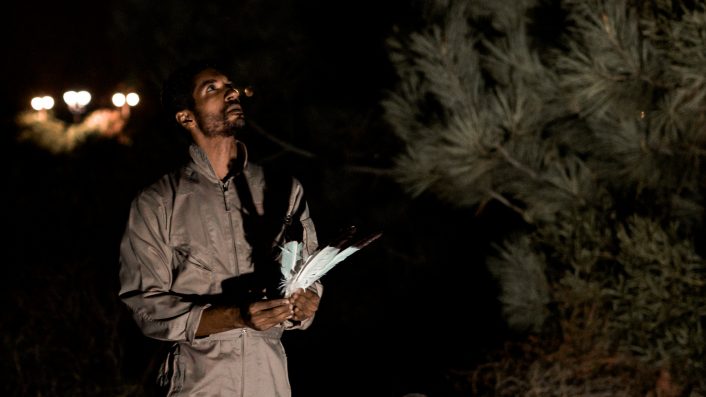 A experiential collection of dreams, myth, and audience-centered narrative, framed as an "audio tour" of a former naval base.

The Sounds of Ikaros

Whispers from the window of a confessional;

A Lewis Carroll poem playing from an old Victrola;

A poem about your personal beauty as you look into a mirror, alone;

The hubbub of partygoers in the room next door;

Messages from the future playing on a cassette Walkman;

Tech conversations playing over com speakers as a scene is lit;

Poems of flight and failure, transmitted to headsets as you walk under the flight path of departing airplanes across from an active runway…

These are some of the many roles that voice-overs have played in telling stories for Third Rail Projects productions over the last eight years. For Ikaros, director Tom Pearson’s poetry captured some of the initial dream imagery surrounding the piece, flowing between themes of flight and fatherhood. Performer Andrew Broaddus provided the central voice as Mary Madsen and Justin Lynch anticipated and trailed off of different words and phrases, giving them different weight and meaning. They created these echoes as a structured improvisation, honed and edited by Pearson and sound designer Sean Hagerty, resulting in a flowing, echoing commentary of scenes performed at Liberty Station in San Diego for the 2019 Without Walls Festival (La Jolla Playhouse): a crash in reverse, a father helping his son to fly, and reflections on how the desert park mirrored the labyrinths of mythology.

Special thanks to David Margolin Lawson, who engineered the voice-over sessions at Pace University.

Photos from the production 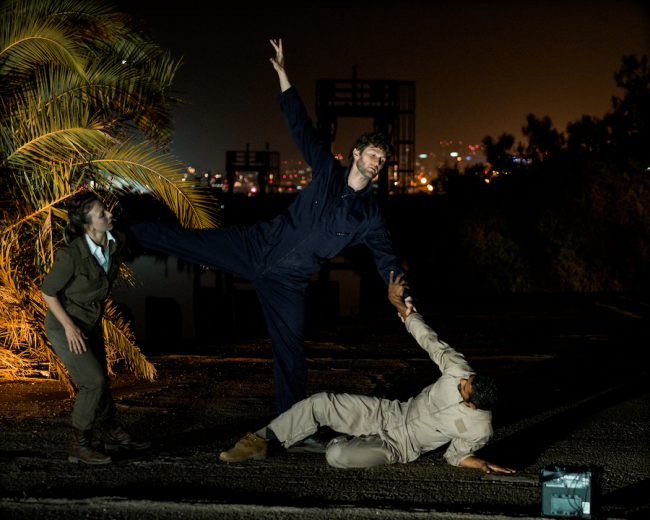 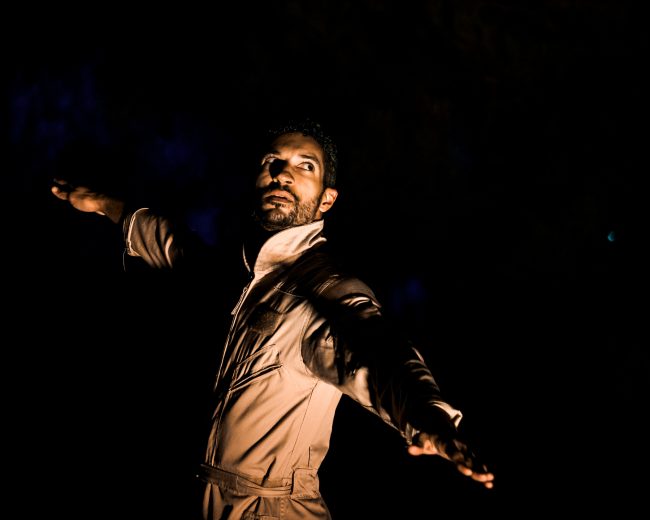 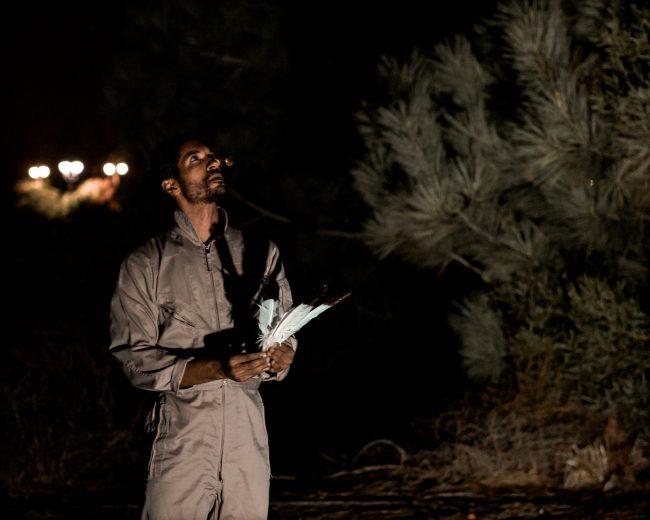 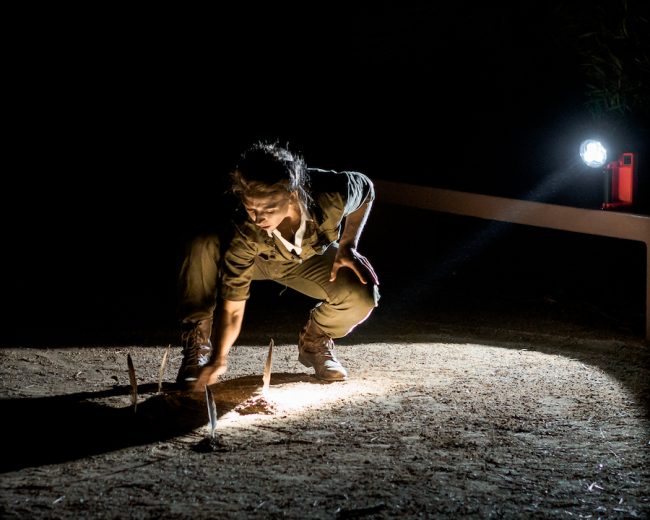 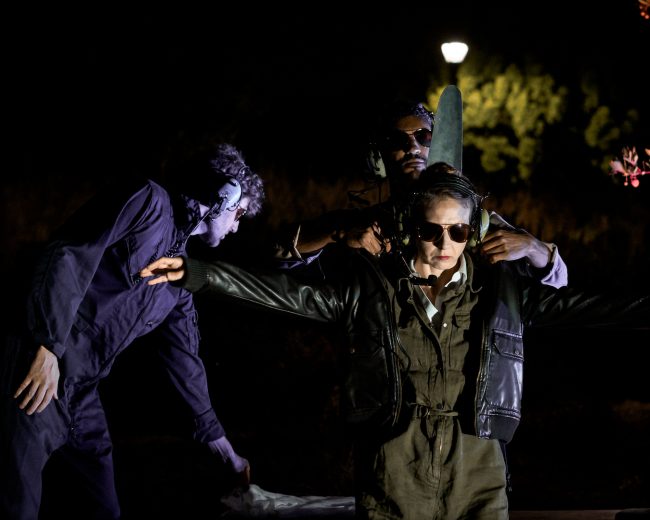 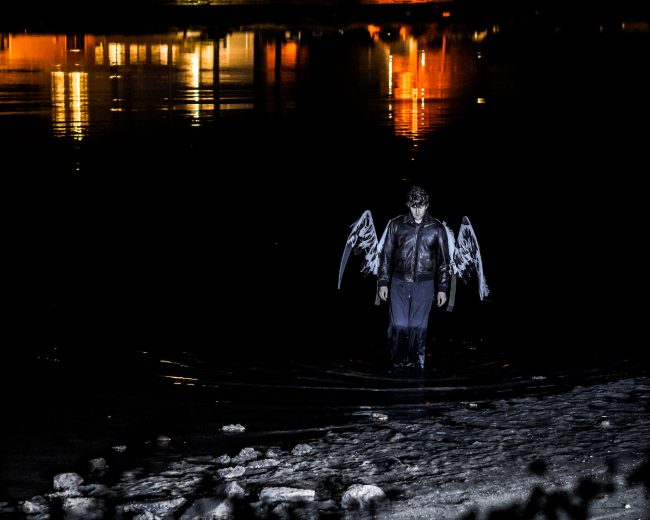 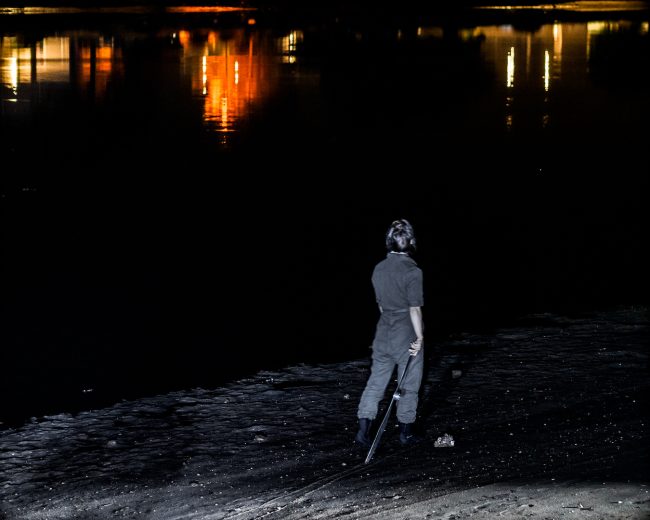 Here are a selection of photos taken by Jim Carmody from the production of Third Rail Projects’ IKAROS at Liberty Station in La Jolla Playhouse’s Without Walls Festival Oct 17-20.

Our Project Webpage is LIVE!

The announcements for La Jolla Playhouse’s Without Walls Festival 2019 have gone out, and our project page for Ikaros is now live. Please visit https://thirdrailprojects.com/ikaros to learn more and view teaser content.  And join us also this month at Ace Hotel New York to see installation , art, and films which are part of the larger work-in-progress, as part of our Libraría: Stanzas series (components of which become part of Ikaros in fall): https://thirdrailprojects.com/stanzas

Commissioned by La Jolla Playhouse for the 2019 Without Walls Festival, Ikaros by Third Rail Projects, is an experiential collection of dreams, myth, film, poetry, dance, and performance—an audience-centered narrative framed as an audio “walking tour” through a desert garden path, on the grounds of a former naval base—which sits across from, and shares its sky with, an active international airport. All of these layers fold into one another to create a series of vignettes and rites of passage that follow a cartography of flight and failure, an odyssey of transformation, prodigal protégés caught in the tailwinds of the achievements and shortcomings of mentors who harness the wind and fly away. It is at once, a walk through a familiar myth that recasts itself as a ritual of absolution and a line-crossing ceremony.

The work begins amidst the roar of airplanes taking off but suddenly transforms as each audience member dons a set of headphones connected to self-contained playback systems. The audience then becomes enveloped in a through-composed musical score paired with a ruminative, poetic, spoken-word narrative that launches their journey.

From there, the work quickly cross-fades in and out of immersive and site-specific live performance vignettes, both physically and sonically, as audiences progress through the site. The headset narrative and score begin to fold together with the air traffic, the nocturnal twilight sounds, the local environmental installations, and performers who directly engage the audience (removing and returning the headsets at strategic moments).

The audience’s journey and the work’s narrative arc are set to a score created by Sean Hagerty and collaborating musician Isaiah Singer who blend local environmental sound layers and sweeping passages of atmospheric and polyphonic tones that collide with character-driven instrumental parallels, bawdy naval songs, and pop-culture samplings.

In this work, Icarus meets Amelia Earhart, a beast roams inside a garden labyrinth, and audiences must find their way at twilight, with a poet’s voice in their ears as their map. Here, they encounter startlingly unexpected scenes along a desert walking path (which offers multiple sensory engagements), and experience episodes alongside a U.S. Navy training vessel confined to a concrete ocean.

The project is one in which expectations about site-specific dance, immersive theater, public audio tours, and traditional storytelling itself are mixed and re-matched in unexpected ways—blurring lines between format and genre, gender expectations, and identity constructions—in order to work within the given circumstances of a particular space, its history, its current function, and where it meets the thematic, dramaturgical, and mythic entry points of our tale.

The work will be written, directed and choreographed by Tom Pearson, Co-Artistic Director of Third Rail Projects and created in collaboration with a small ensemble of Third Rail performers including Andrew Broaddus, Justin Lynch, and Mary Madsen. Original music will be composed by Sean Hagerty and collaborating musician Isaiah Singer. The work will be designed for small audience groups of 28 to deliver the company’s signature blend of intimate audience engagement, movement-based theater, and impactful visual design.

The company is led by Artistic Directors Zach Morris, Tom Pearson, and Jennine Willett, and is dedicated to re-envisioning ways in which audiences engage with contemporary performance. They have made work in New York, nationally, and abroad since 2000. The company’s currently running, award-winning immersive hit Then She Fell, was named as one of the “Top Ten Shows of 2012” by Ben…