Listen to the Future: Inclusive and Equitable Orchestras

Following the free concert on June 16, the McGills and Symphony Orchestra stayed on at Studebaker Theater for the next two days for a recording session for a new album on Cedille Records. The album is named for composer Michael Abels’ Winged Creatures. Abels was commissioned by Cedille Records for this special project with the McGill brothers. The work evokes images of Abels’ inspiration: butterflies and other flying creatures.

Also featured on the album is Joel Puckett’s Concerto Duo, which was commissioned by CYSO in 2012 for a joint concert with the McGills. The album also includes Franz Danzi’s Sinfonia Concertante for Flute, Clarinet, and Orchestra, Op. 41 and Saint-Saëns’ Tarantelle, Op. 6,  which the brothers performed on Mr. Rogers’ Neighborhood as teenagers.

The experience was an unforgettable one for CYSO musicians who not only had the chance to meet and perform with such revered members of the orchestral community, but also experience what goes into making a professional recording. The album was released in May 2019 and is available from Cedille Records and CYSO.

CYSO’s Free Performance with Demarre and Anthony McGill on June 16, 2018 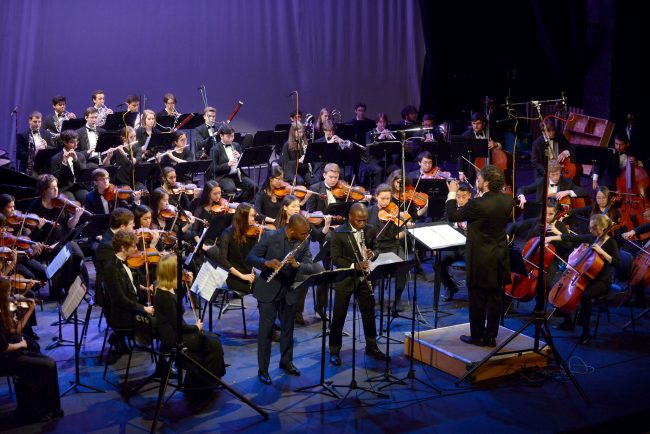 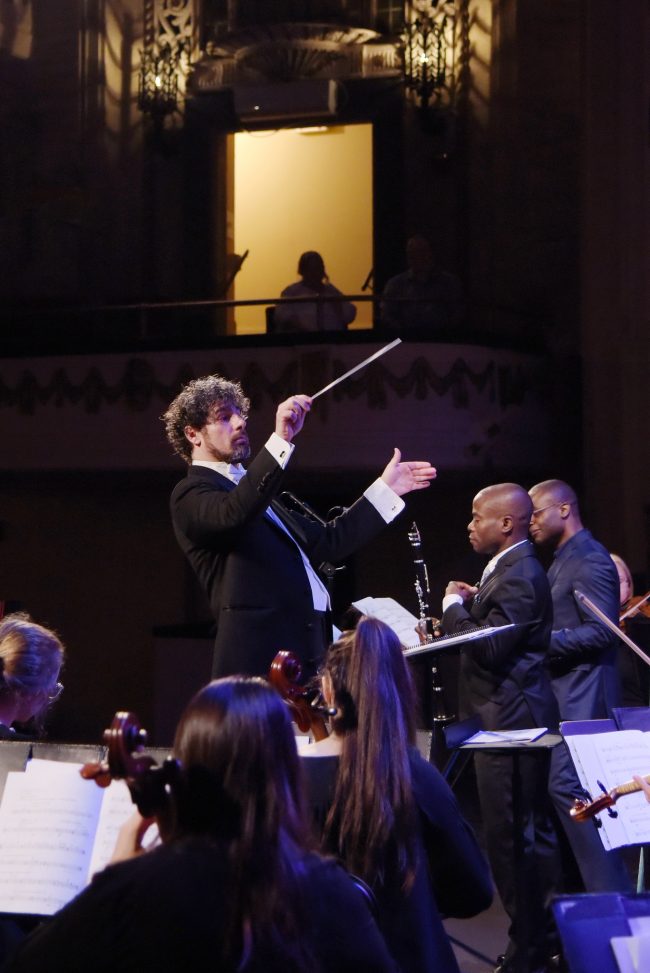 Following the League of American Orchestras conference, CYSO presented a free public concert with the McGills on Saturday, June 16, 2018. The performance took place at the Fine Arts Building’s Studebaker Theater and was attended by hundreds of community members and young musicians.

The concert included a second performance of Michael Abels’ Winged Creatures, Franz Danzi’s Sinfonia Concertante for Flute, Clarinet, and Orchestra, Camille Saint-Saëns Tarantelle, and Joel Puckett’s Concerto Duo, commissioned by CYSO in 2012 for another performance with the McGills.

CYSO at the League of American Orchestras Conference on June 14, 2018 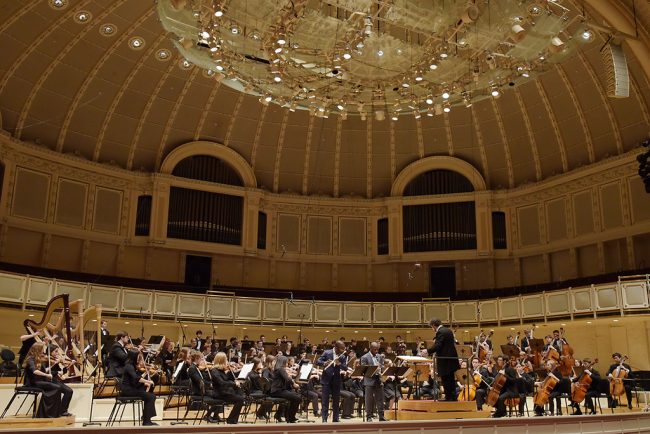 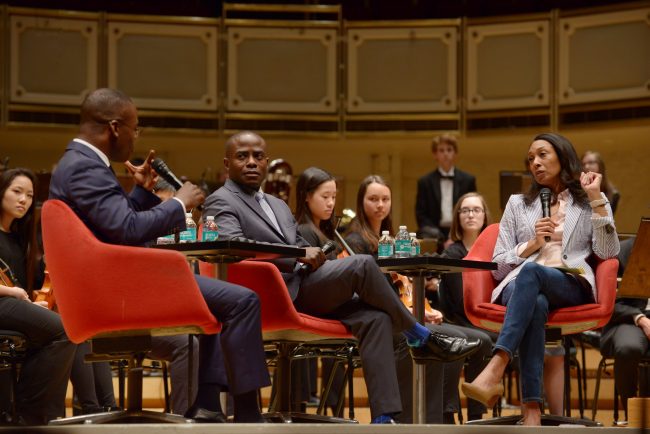 The League of American Orchestras’ “Inclusive & Equitable Orchestras” session included the world premiere of Michael Abels’ “Winged Creatures” performed by CYSO alumni Demarre & Anthony McGill, along with CYSO’s Symphony Orchestra. The McGills also sat down with Jeri Lynne Johnson, founder and artistic director of Black Pearl Chamber Orchestra, in a conversation about their early music experiences and careers. The session finished with a performance of Barber’s Symphony no. 1 by Symphony Orchestra under the baton of Music Director Allen Tinkham.

The Symphony Orchestra of Chicago Youth Symphony Orchestras (CYSO) premiered a new work by Michael Abels, “Winged Creatures,” with soloists Anthony McGill (clarinet) and Demarre McGill (flute) on June 14, 2018 as part of the League of American Orchestras Conference in Chicago. Following the performance, CYSO and the McGills presented a panel discussion titled “Inclusive and Equitable Orchestras” to the audience of 1,000 industry professionals at Symphony Center’s Orchestra Hall. On June 16, 2018, CYSO and the McGills performed “Winged Creatures” along with “Concerto Duo” by Joel Puckett (commissioned by CYSO in 2012) and other works for the public at the Studebaker Theater, and held recording sessions on June 16 and 17, 2018. The resulting recording, produced by Chicago label Cedille Records, will be released in May 2019.

CYSO, as well as the orchestral community at large, recognizes that there is a lack of diversity among professional orchestra musicians as well as audience members. In this field, youth orchestras such as CYSO have the exceptional opportunity to make a positive impact in this area. By training young musicians between the ages of 6 – 18, CYSO is developing the future of orchestral music, both in terms of performers and audiences. The McGills are alumni of CYSO and, as natives of Chicago, have a strong connection to the organization and our community. And, as prominent Black musicians in the field of classical music, the McGills serve as important role models for young musicians of color. In order to also contribute to diversity in repertoire, CYSO and Cedille Records chose to work with composer Michael Abels, who has written over 20 works for orchestra and composed the score for the film “Get Out.”

For 72 seasons, CYSO has been providing high-level instrumental ensemble training to students from across the Chicago area. CYSO alumni go on to perform in the world’s finest orchestras and music ensembles, including the Chicago Symphony Orchestra, the Lyric Opera Orchestra, the New York Philharmonic, and many more. CYSO’s Symphony Orchestra is comprised of 125 of the most talented and dedicated student musicians from the Chicago area. As the flagship orchestra of CYSO, the Symphony Orchestra has garnered accolades and recognition over the history of the ensemble, with Chicago Tribune critic John von Rhein declaring of a recent concert “The performance would have done credit to an adult professional ensemble.”

This project is part of CYSO’s and the League of American Orchestras’ efforts to advance diversity and inclusion so that orchestras better represent the communities that they serve. The performance and panel discussion at the League of American Orchestras conference helped to engage orchestra representatives in this important discussion. The recording, which includes “Winged Creatures,” “Concerto Duo,” and other works for flute, clarinet and orchestra, is being produced by Cedille Records. Cedille is an organization that is dedicated to producing classical recordings of the highest quality featuring outstanding musicians from Chicago, with a particular focus on new and underrepresented compositions and important interpretations of standard repertoire in innovative programs.

Infinite Tree by Glenn Kotche
Like this? Login or register to make a playlist of your favorites pieces.
Features: Chicago Youth Symphony Orchestras

Chicago Youth Symphony Orchestras’ Symphony Orchestra was joined by composer and Wilco drummer Glenn Kotche for the world premiere of his new concerto, Infinite Tree. Kotche and the orchestra, under the baton of Maestro Allen Tinkham, performed at Symphony Orchestra’s May 2017 concert at Symphony Center’s Orchestra Hall in Chicago. CYSO commissioned the piece. This sample shows the high quality of performance by CYSO students, as well as the organization’s commitment to commissioning and performing new music.

Concerto Duo by Joel Puckett
Like this? Login or register to make a playlist of your favorites pieces.
Features: Chicago Youth Symphony Orchestras

The first movement of Concerto Duo by Joel Puckett for solo flute, solo clarinet and orchestra. The recording is from the premiere performance with Demarre McGill, flute, Anthony McGill, clarinet, and Chicago Youth Symphony Orchestras with Allen Tinkham, conducting. The piece was recorded live at Orchestra Hall in Chicago on May 13, 2012. This work sample shows CYSO’s previous collaborations with Demarre and Anthony McGill and CYSO’s commitment to commissioning and premiering new works.

RADIANT CHiLD by David T. Little
Like this? Login or register to make a playlist of your favorites pieces.
Features: Chicago Youth Symphony Orchestras

Chicago Youth Symphony Orchestras’ mission is to inspire and cultivate personal excellence through music. To do this, CYSO provides high-level instrumental ensemble training to students from across the Chicago area. We continue to grow and evolve to meet the needs of our community, and CYSO now provides the following programs: Symphony Orchestra, Philharmonic Orchestra, Concert…