EP and music video release for “After” by Joel Thompson 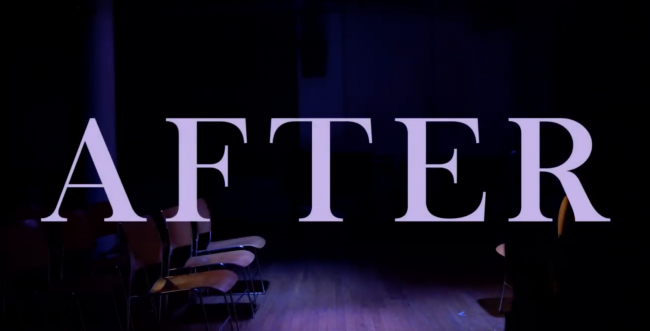 EP and music video release of After by Joel Thompson, view the video here.

To purchase After mp3s (all proceeds are donated to RAINN and EROC), please visit: https://store.cdbaby.com/cd/shepherdess43

Music video for Joel Thompson’s “After”

Over the weekend, we filmed the music video to accompany After, a two-movement work by composer Joel Thompson, written for Shepherdess. The video, to be released in 2019, was filmed and directed by Adele Fournet with movement design by Tiffany Mangulabnan. We can’t wait to share it with the world!

Posted on September 6, 2018 by Hajnal Pivnick

We are thrilled to welcome Adele Fournet to our project! Adele will be working with Hajnal and Kayleigh to film a music video for Joel Thompson’s After this November.

Also in November, we will be recording works written for Shepherdess by composers Joel Thompson, Annie Hui-Hsin Hsieh, and Luis Fernando Amaya Muñoz.

Adele is a PhD candidate in Ethnomusicology at New York University where she is writing about the intersections of gender, technology, labor, and aesthetic values in popular music production, as well as pursuing applied and activist research methodologies.  She is also a musician, producer and videographer in New York City. She directs a web series about female music producers called Bit Rosie (www.bitrosie.com), which became the NYU library’s first music-related streaming video archive in 2017.  Her films have been screened on PBS New York and at the NYC Independent Film Festival.  Current projects and collaborations include Bit Rosie, Cuttingbird, CorpusMedio, Celeste Krishna, and digitice.org.

“New American Music for Violin and Voice” is a set of four new works for violin and voice, commissioned and performed by violinist Hajnal Pivnick of Tenth Intervention and mezzo soprano Kayleigh Butcher of Quince Ensemble. Hajnal and Kayleigh are both contemporary classical performers dedicated to commissioning and disseminating new works by composers living in the United States. As Artistic Director of Tenth Intervention, Hajnal has worked directly with over 30 composers to premiere and commission new works since 2012, and Kayleigh has commissioned over 70 new works for voices as the Director of Quince Ensemble as well as many pieces for herself as a soloist.

In addition to commissioning four new works, we are touring them in Tennessee, Georgia, and Mississippi. We have been invited by Opera Memphis to perform at the 6th Annual Midtown Opera Festival in April 2018. Additional performances during this tour will take place in Oxford, Mississippi and Atlanta, Georgia.

Our self-released digital album would introduce four world premiere recordings into the voice and violin repertoire library. In order to represent the gamut of styles and backgrounds within the American new music community, two of the four composers involved in this project are women and all four are composers of color. This project follows Hajnal and Kayleigh’s personal artistic missions to create new work that is community focused, diverse, and pioneering. It is also central to our mission as performers and commissioners to actively commission, program, and record works that are written by composers from underrepresented demographics in contemporary classical music, as well as music dealing with subject matters that are often overlooked in classical performances.

Each composer has a distinctive compositional voice, drawing their writing inspiration from American folk influences, instrumental and vocal extended techniques, and the intersection of social politics and music, making this a unique and important project both for the performers and composers involved as well as future audiences. On top of commissioning women and composers of color, our goal is to create a definitive recording of these new works by composers living in the United States as well as perform them in Southern states, such as Tennessee, Georgia, and Mississippi.

Each of these composers have experience writing extensively for voice and string instruments:

-Annie Hiu-Hsin Hsieh has written for Wien Modern and Ensemble Paramaribo. Her vocal music explores the voice as a tool for communication, using its affective and perceptive possibilities.

-Luis Fernando Amaya has worked with and written for Quince Ensemble and Fonema Consort, and his writing for strings has been performed by Grammy-nominated Spektral Quartet.

This album will be recorded at Oktaven Studios with sound engineer Eric Hachikian.

Hungarian-American violinist Hajnal Kármán Pivnick was born and raised in Memphis, Tennessee. She advocates the performance and promotion of music written in the 20th and 21st century, and works extensively as an educator and arts administrator. She is co-founder of Tenth Intervention, a collective of musicians that presents new music in New York City. Hajnal…