Posted on October 2, 2019 by Raleigh Civic Symphony and Chamber Orchestra 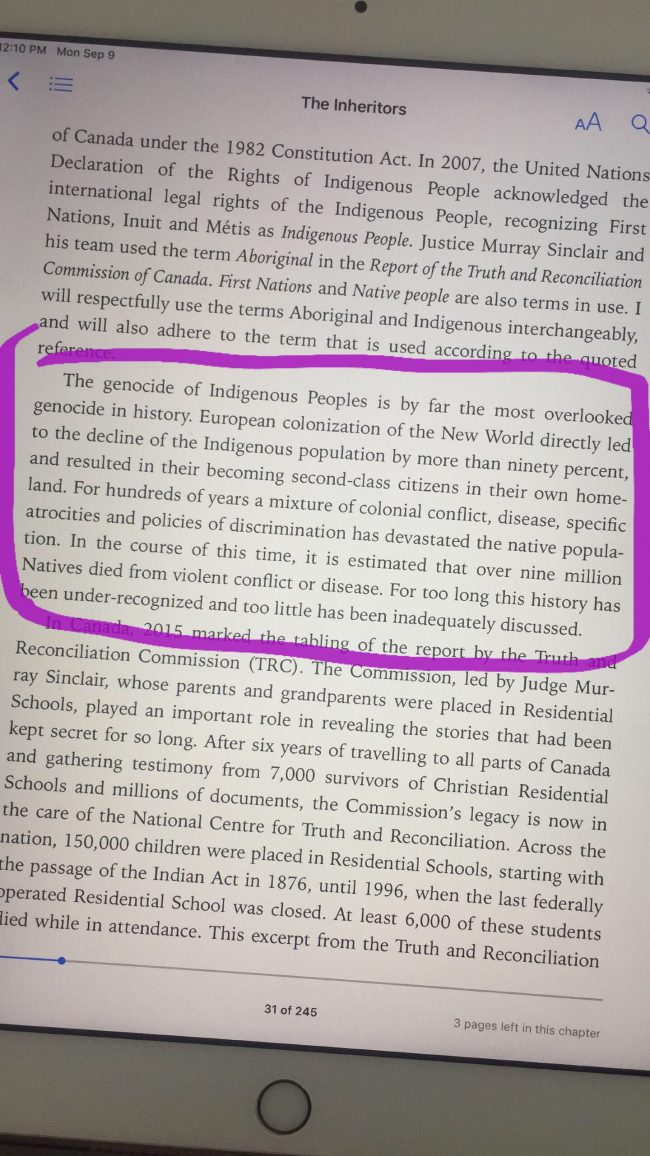 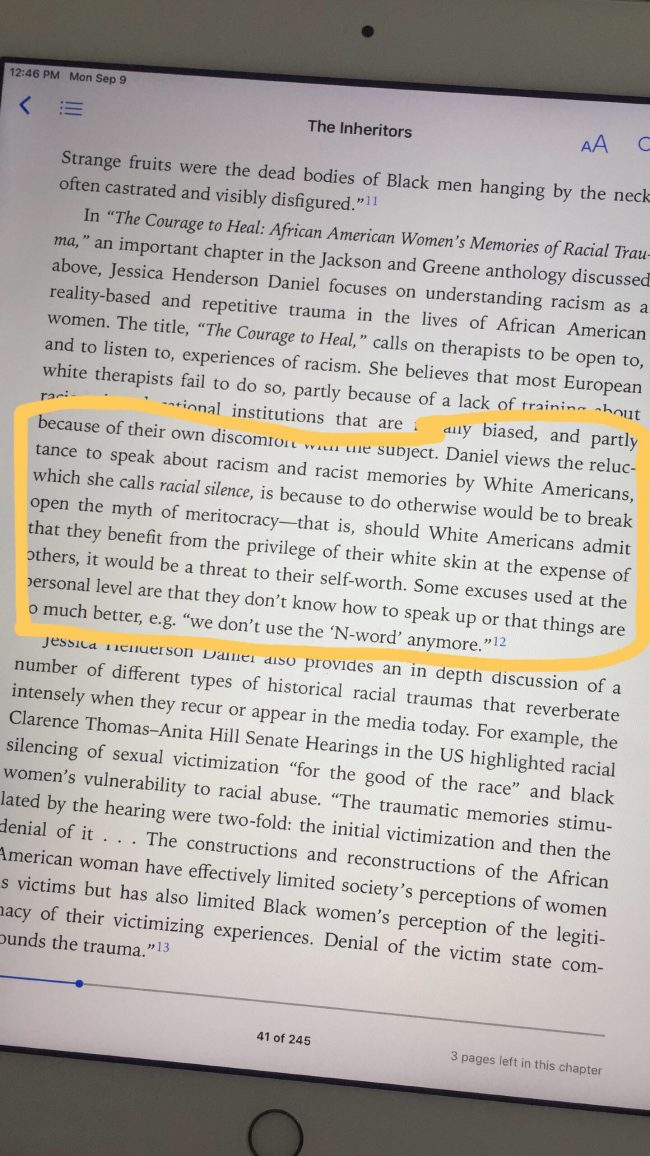 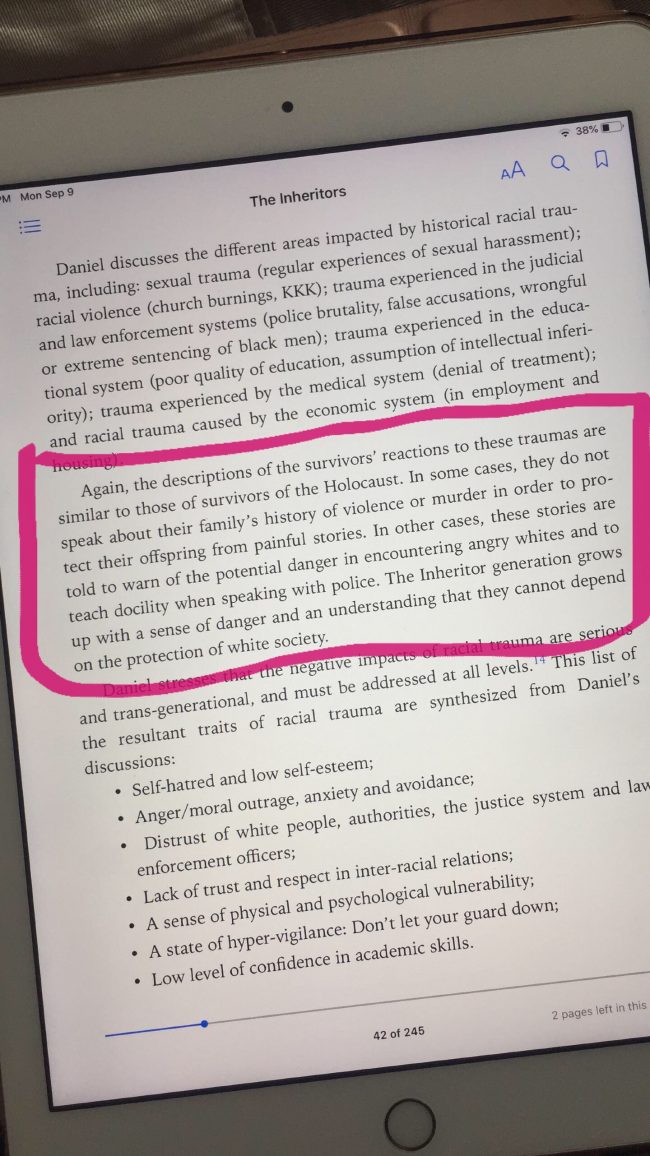 For my research for this project I have begun reading “The Inheritors” by Gita Arian Baack, PhD. The book explores the experiences and stories of descendants of victims of the Jewish Holocaust, American slavery and racism, and the cultural genocide of North American Indigenous peoples, particularly those who were subjected to Canada’s Residential Schools. Dr. Baack argues that many of these people suffer from trans-generational trauma, or inherited trauma. Though they have such different histories, there are many parallels to their life experiences, personal struggles, and worldview. The trauma of their elders tends to haunt them and shaped the ways in which they were raised. Here are a few of many passages I have found compelling.

This grant will support a new work for the Raleigh Civic Chamber Orchestra by Allison Loggins-Hull. She writes, “I am focused on creating work that is responsive to the times and particularly drawn to highlighting the experiences of minorities, women, and exploring how American politics affect future generations…I am often consumed with these issues and histories, and as an artist I strongly believe it is my responsibility, especially in consideration of the times we are living in, to create work in this vein.” Though she has previously been commissioned by the Metropolitan Museum of Art and Carolina Performing Arts, this work will be her very first orchestral composition. The RCSA is honored to provide her the opportunity to explore the orchestra palette in the creation of this new work which will explore the concept of the inter-generational transmission of trauma (i.e. slavery, the holocaust, etc.). Ms. Loggins-Hull will attend the concert and selected rehearsals, speaking with musicians and audiences about her creative process and her emotional and personal perspectives on the music. It will be presented alongside programming that similarly speaks to the power of music to transcend adversity and create a shared sense of history and experience.

Allison Loggins-Hull is an African-American flutist, composer and educator with an active career performing and creating music of multiple genres. She is one half of the critically acclaimed flute duo Flutronix, which was praised by The Wall Street Journal for being able “to redefine the instrument.” She is the creator and producer of Diametrically Composed, a New Music USA grant-winning project that exclusively features the stories of artists who are also mothers. She recently received a fellowship from The Hermitage in Englewood, Florida.

This commission arises from the Raleigh Civic Orchestras’ commitment to contemporary music. The orchestras have premiered a new work on every program for the last four seasons, opening up the creative process to the groups’ amateur musicians and to its audiences. The orchestras share a vision that new works are vital to the community and that fostering new works should not be reserved for elite professional ensembles. This will be the 20th work the organization has commissioned and premiered.

The RCSA fills a distinctive niche in Raleigh’s vibrant and diverse cultural landscape. Programmatic themes, repertoire and commissioned composers are chosen to highlight populations not often featured in typical classical orchestral concerts, including female, non-Caucasian and emerging composers. The goal is to provide programming and artists that reflect and resonate with Raleigh’s diverse population. Over the past five seasons, the RCSA has commissioned a significant body of work by women and minority composers.

“Hammers for flute and percussion quartet” performed by Mel Baker, flute and Sandbox percussion
Like this? Login or register to make a playlist of your favorites pieces.
Features: Allison Loggins-Hull

The composer writes, “”Hammers” was inspired by construction noises and other cacophonies outside of my Brooklyn, NY window.”

Jeff Peterson: Concerto for Slack Key Guitar and Orchestra – Malama ‘Aina
Like this? Login or register to make a playlist of your favorites pieces.
Features: Raleigh Civic Symphony and Chamber Orchestra, Peter Askim

A partnership between the Raleigh Civic Symphony Association and NC State University, the Raleigh Civic Orchestras are committed to programming contemporary music in a thematic context, connecting orchestral repertoire to larger ideas in creative ways. Led by conductor Peter Askim, the orchestras are comprised of amateur musicians and university students, bringing together the university and…