Not then, not yet

“Not then, not yet” enjoys successful premiere. Catch us now at APAP! 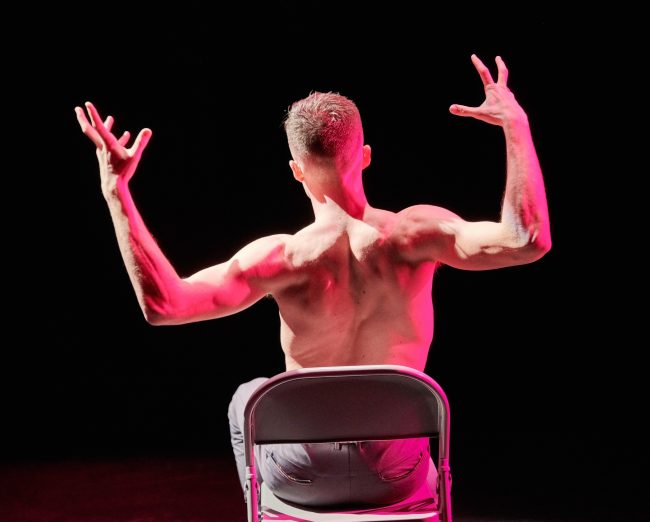 The Tiffany Mills Company joined forces with dramaturge Kay Cummings, plus composers Angelica Negron and Muriel Louveau, to premiere “Not then, not yet” November 13-16, 2019, at The Flea Theater. We performed to full houses, enjoying exciting previews and reviews. (See select links below.)

U.S. choreographer Tiffany Mills joins forces for the first time with Puerto Rican composer Angélica Negrón and French vocalist Muriel Louveau to celebrate the 200th anniversary of Mary Shelley’s “Frankenstein” with the creation of “Not then, not yet”. This hybrid evening-length work weaves pre-recorded electronic music, voice, and movement to create a world inspired by Shelley and themes of liminality found in her seminal novel.

Liminality (being in-between, on a threshold, disoriented) was a common occurrence for Shelley throughout her life and writings. She often existed in an altered state caused by life challenges and traumatic events — extreme weather, family deaths, cancer. The artists relate to Shelley, liminality, and her genesis of a creature representing the beginning and ending of life. With the last of these, they find personal connections: Mills recently gave birth to her second child; Louveau just lost her father, after a near-death experience.

Liminality is traditionally associated with mid-stages of ritual, political, and cultural change. How can this term now be applied to a female-driven exploration of the life cycle focusing on portals and passageways? Negrón, Louveau, and Mills will examine how the threads from Shelley and their personal lives transmigrate and intermingle. They will start with Shelley as an historical figure and source of inspiration via “Frankenstein”, and crisscross with their familial connections. As the artists map internal landscapes in an episodic journey, they will blur boundaries between: past/future, old/young, life/death.

As a society, we value the deep, halting insights of creative people like Shelley. Using her story as a catalyst, the artists aim to build awareness of today’s issues of liminality faced by others who might not have a voice — the infant, the terminally ill, the patient diagnosed with mental illness. The artists wish to broaden societal awareness to include those who are marginalized and overlooked, while exploring the frontier of understanding liminality.

El Colapso (Premiere at National Sawdust, 2015)
Like this? Login or register to make a playlist of your favorites pieces.
Features: Angélica Negrón

Cue: 00:53
“El Colapso” is part of a song cycle, which presents a collection of ambient influenced songs about escapism, delusion, longing and mortality. It features Negrón (voice, live electronics), Bayoán Ríos (charango and zampoña, or Andean pan flute), Shayna Dunkelman (xylosynth), as well as an orchestra of found sounds crafted through cookware and other domestic sounds. This song explores a similar sound palette to “Endless Shapes” with manipulated found sounds, a mysterious dream-like atmosphere, and repetitive malleable patterns.

Tiffany Mills is a choreographer and artistic director of the NYC-based Tiffany Mills Company. Mills moved to NYC in 1995, and formed Tiffany Mills Company in 2000, earning immediate national recognition: “Mills favors a boldly physical vocabulary, and her dancers fill the space with a fearless sense of freedom and exhilaration.” —The Washington Post. Recent…