Posted on September 8, 2019 by Editions Verde 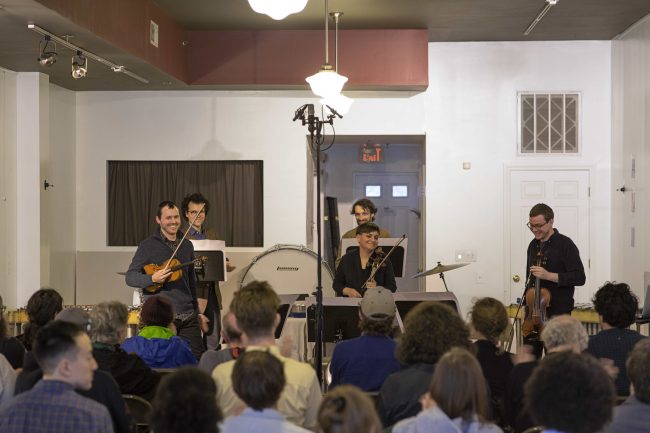 Ordinary Affects — Morgan Evans-Weiler (violin), Jordan Dykstra (viola), Laura Cetilia (cello), J. P. A. Falzone (percussion), and Luke Damrosch (percussion) — recently premiered two new works by Alvin Lucier and Jordan Dykstra at MAC650 Gallery in Middletown, CT. The commissions, “Corner Church and High” (Lucier) and “32 Middle Tones” (Dykstra), were also recorded at the World Music Hall at Wesleyan University and are currently in the post-production stage for mixing and mastering. An LP of both pieces will be released in early-mid 2020.

Photo of Ordinary Affects at MAC650 by Shelli Weiler.

Middletown Connecticut-based composers Alvin Lucier and Jordan Dykstra have been commissioned to each write a new work for Ordinary Affects. While the premieres will take place in May 2019, this recording will happen in June, and the mixing/mastering in July. In addition to mixing, mastering, and performer fees, this project also budgets for an LP release through experimental music publisher Editions Verde. Ordinary Affects is  an ensemble founded by violinist Morgan Evans-Weiler and whose members also include Luke Martin (guitar), Laura Cetilia (cello), and J.P.A. Falzone (keyboards). The New England-based group is very active in the northeast and has recently received commissions from Christian Wolff, Eva-Maria Houben, Ryoko Akama, Sarah Hughes, Jürg Frey, and Michael Pisaro. The recording and audio editing will be done by Boston-based sound engineer Luke Damrosch, founder of Efferent Productions.

Alvin Lucier (b. 1931) is an American composer of experimental music and sound installations that explore acoustic phenomena and auditory perception. A long-time music professor at Wesleyan University, Lucier was a member of the influential Sonic Arts Union, which included Robert Ashley, David Behrman, and Gordon Mumma.

Jordan Dykstra (b. 1985) is a Connecticut-based composer, arranger, violist, and improviser. His work is drawn from a familiarity with specific conceptual, avant-garde, environmental, and graphic languages. Jordan received his B.F.A. from CalArts where he studied with Michael Pisaro, Wolfgang von Schweinitz, Ulrich Krieger, and Eyvind Kang. With a focus on the connection between astronomy and composition he received his M.A. in experimental music composition from Wesleyan University where he studied with Alex Waterman and Neely Bruce. Jordan has also done independent studies with Daníel Bjarnason (Iceland), Chiyoko Szlavnics (Germany), Jürg Frey (Switzerland) and is currently working with Alvin Lucier (Connecticut).

Alvin Lucier — “Crossings”
Like this? Login or register to make a playlist of your favorites pieces.
Features: Alvin Lucier

Lucier’s score notes (excerpt): “Crossings is scored for sixteen players: two flutes with piccolos; two oboes, one with English horn; two clarinets in B flat, with bass clarinets in B flat; bassoon; trumpet in C; two horns in F; tuba; two violins; viola; cello; double bass. The players are divided equally on either side of the stage. A single loudspeaker is positioned front center. There is no conductor. The players watch a video monitor which displays numerically, in cycles per second, the rapidly changing frequencies of the ascending wave.”

Jordan Dykstra — “A Known Unknown” (snippet)
Like this? Login or register to make a playlist of your favorites pieces.
Features: Editions Verde, Jordan Dykstra

Jürg Frey — “60 Pieces of Sound” (excerpt)
Like this? Login or register to make a playlist of your favorites pieces.
Features: Morgan Evans-Weiler, Luke Damrosch

Editions Verde is an experimental publisher exploring the relationship between physical and sound objects. So far, EV has produced small runs of sound-based objects (CDs, MP3Ds) and printed matter (scores, books, posters, card games) in a variety of languages, and will further expand into the realm of single objects and performances in the coming 2020-2021…