Recording works for strings and piano with Spektral Quartet and Cristina Valdes.

My final recording “Breath in Quiet” for solo cello was recently completed at the Experimental Sound Studio in Chicago with Russell Rolen of Spektral Quartet.  The work was written for Russell (commissioned by the McCormick Foundation), so it was such a treat to work with him again in recording this work.  This piece will no longer be included in the upcoming CD as I felt the album as a whole would make a better cohesion with another work, but I do plan to make it available to the public in the near future.  This mix is going to be beautiful and I’m excited to be able to share it.

In the meantime, my CD release with Starkland Records is official!  Once the mastering is complete and the date is set, I will be sure to announce it.  As part of the final report of this recording project, I thought I share a mix I made of the first movement of “Minyo” I recorded with Spektral Quartet over this summer as a little sneak peek for you to enjoy.  Please listen to this as a work-in-progress mix.

Posted on September 1, 2019 by Kotoka Suzuki 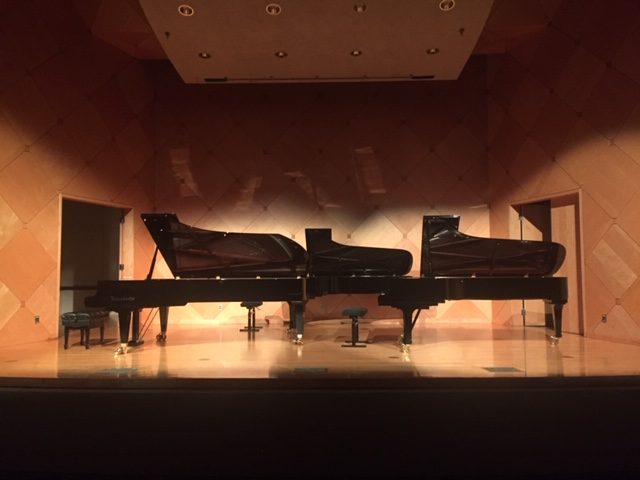 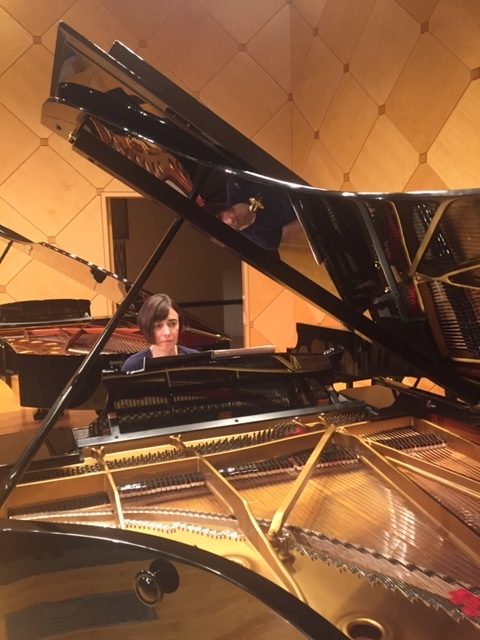 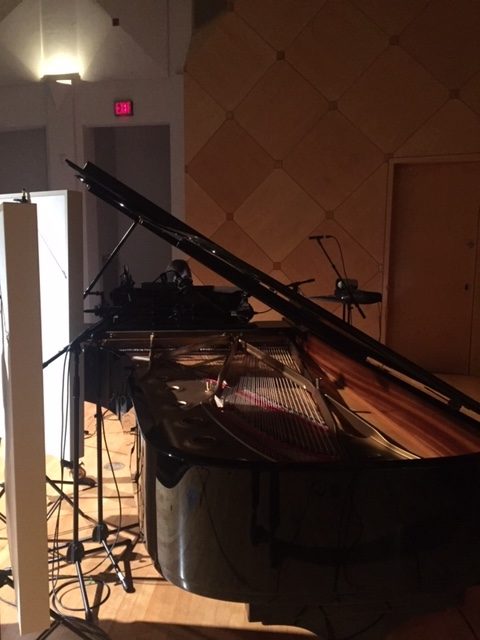 I’m excited to share that I recently completed the recording of “Shimmer, Tree | In Memoriam Jonathan Harvey” for piano and electronics with Cristina Valdés for the upcoming CD release.  She gave a beautiful performance of the work in Katzin Hall (Arizona State University) last month in July.  Katzin Hall has three gorgeous pianos, and we chose the Hamburg Steinway for its light and warm tone.  We spent all day recording with so many great takes of the work (about three hours of material), so it will be challenging to choose which take to use for the final mix!  Thanks also to Charles Szczepanek for recording work.

Performance & Recording with the Spektral Quartet

It was such an incredible treat to hear my work “Minyo” performed by the Spektral Quartet earlier this month.  The quartet gave a breathtaking performance of “Minyo” at the Rush Hour Concert at St. James Cathedral on July 9th, then a recording session of this work at the Logan Center Performance Hall of the University of Chicago on the following day.  Special thanks go to the recording engineer, Christopher Willis, and his crew.  They did such an incredible job.  I can’t wait to put this recording altogether.  In September, I’ll be recording my cello solo piece “Breath in Quiet” with Russell Rolen and I’m really looking forward to this.  Also, please look out for another live performance of “Minyo” by the Spektral Quartet at the University of Chicago in November!

I’m thrilled to be working on my first debut solo album with the Grammy-nominated Spektral Quartet and phenomenal pianist, Cristina Valdes.   This album will highlight my instrumental works, many with electronics that have not yet been published.   They are all intimate in setting that reflec on life, breath and wind.

I’ll be recording three works for this album: “Minyo” (1997 /15:00) for string quartet, “Breath in Quiet” (2014 / 8:00) for violoncello and thread, and “Shimmer, Tree | In Memoriam Jonathan Harvey” (2014 /15:00) for solo piano and electronics.  “Breath in Quiet” was commissioned by the McCormick Foundation and written for the cellist Russell Rolen (Spektral Quartet) in 2014 and premiered at Constellation in Chicago in May 2014.   I will be recording “Shimmer, Tree” with Cristina Valdes whom I have collaborated on various projects since 2007.

The recordings of these three works with Spektral Quartet and Cristina Valdes will take place in Chicago between spring and summer of 2019.

I can’t wait for these recordings to all come together for my new debut album!

Although this is an older work, I still feel deeply connected to it.  The work consists of five short movements, which are largely influenced by Japanese folk music.  Elements of folk music can be heard directly in the variations of pitch and rhythm.  Strings also imitate the sounds of the traditional instruments commonly used in folk music: shamisen (guitar), koto (harp), taiko (drum), and voice.

Breath is a simple gesture. Made without consciousness, it contains subtle changes that can have tremendous meaning. This work is inspired by the conceit that subtle differences can be contained in the same gesture. Shifting in sonic color and rhythm, this wok transforms throughout the duration of the composition.

This two-movement work is written in memory of the British composer, Jonathan Harvey.   I vividly recall a particular moment as we sat together by a window one sunny afternoon in California discussing music. In the middle of his sentence, he paused and looked outside the window, mesmerized by a tree as its leaves gently swayed in the wind. He then softly said, “Do you see how beautifully that tree is moving?”. This piece depicts the image of this moving tree. The second movement is loosely based on his work, “Bhakti”.

Minyo
Like this? Login or register to make a playlist of your favorites pieces.
Features: Kotoka Suzuki

This is a performance of “Minyo” by Arditti. I will be recording this work with the Spektral Quartet.

Hidden Voices (2003)
Like this? Login or register to make a playlist of your favorites pieces.
Features: Kotoka Suzuki, Cristina Valdés

Kotoka Suzuki / 鈴木琴香 is a composer focusing on both multimedia and instrumental practices. She has produced several large-scale multimedia works, including spatial interactive audio-visual work for both concert and installation settings, often in collaboration with artists and scholars from other disciplines.  Her work engages deeply in the visual, conceiving of sound as a physical…