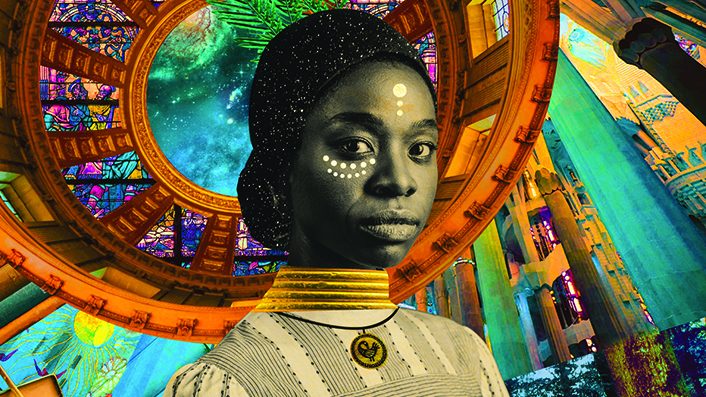 Postponement due to COVID-19

Due to the suspension of all Stanford Live performances required by the COVID-19 crisis, we will not be able to present Scott Joplin’s Treemonisha during its originally scheduled dates in April 2020. We are working with the project team to reschedule these performances and look forward to sharing this work with our community.

We’re excited to announce that the creative team for Scott Joplin’s Treemonisha has expanded! Jawole Willa Jo Zollar, celebrated founder of Urban Bush Women, will be the work’s choreographer.  Award-winning playwright and librettist Cheryl L. Davis has joined us as co-librettist.

Stanford Live will commission and present the April 2020 world premiere of a reimagining of Scott Joplin’s 1911 opera Treemonisha. The collaborating artists will bring an entirely new libretto and expanded musical language to the piece, honoring Joplin’s vision while creating a work reborn for our times.

Joplin’s Treemonisha is one of the few surviving performance pieces set during Reconstruction written by a black person who lived through it. It is extraordinarily progressive for its time, with Joplin’s female protagonist, Treemonisha, elected by her community as their leader, decades before women and most people of color could vote.But Joplin never found a backer for his opera, and if not for a piano/vocal reduction he registered with the Library of Congress, Treemonisha would have vanished forever.

Treemonisha’s music was a high point of Joplin’s artistry, but his libretto’s weaknesses have limited its viability. In response, we have commissioned playwright Leah-Simone Bowen to write a new libretto inspired by Joplin’s original; composer/performers Jessie Montgomery and Jannina Norpoth to orchestrate and expand a new score; and director Weyni Mengesha to shape the piece.

In Treemonisha’s new story, an African-descended community has been split in the aftermath of slavery. One side remained on the plantations, endured slavery, and found solace in the church. Others escaped, and from their forest hiding places, rekindled spiritual practices carried to the Americas from Africa.

Treemonisha, part of a plantation community, also ﬂees, into a painful journey toward self-knowledge.Ultimately, she undertakes to mend the torn fabric of her two communities, and for her efforts is elected their leader.

The music will mirror the work’s dramatic arc, beginning with a relatively period-specific sound for Act One. For Act Two, tied to the Runaway community, Montgomery and Norpoth are crafting a hybrid of Joplin, blues, jazz, and West African kora and percussion. Act Three will fuse West African rhythms with ragtime, spirituals, gospel, and jazz, evoking the standoff, then reconciliation between the two communities.

Montgomery and Norpoth will honor Joplin’s fusing of classical and popular forms by using historically relevant sources and idioms such as jazz and contemporary classical music that relate to Joplin while extending his voice.

Nine soloists, a chorus of seven, and an orchestra of strings, trumpet, clarinet, kora and percussion will all be costumed and on stage. The creative team envisions the orchestra as all black and all female, serving as the characters’ matriarchal ancestors.

Before the premiere, the company will hold a residency at San Francisco’s Bayview Opera House community center, whose strong relationships with its historically African American neighborhood will help the project reach diverse audiences. Open rehearsals, talks, and community workshops will span the Bayview residency, our community and school partners, and public programs at Stanford.

Treemonisha has broad appeal for a multigenerational, multiethnic/racial audience, and will generate interest for its topical resonance, accessible music, and dramatic richness. The project artists see Treemonisha’s concerns around race, gender, historical trauma, and community identity as both historically revealing and deeply contemporary.

This is a work for string quartet by Treemonisha co-composer Jessie Montgomery. It is performed by the Catalyst Quartet, of which she is also a member, performing on 2nd violin in this piece. The piece illustrates both her compelling musical imagination and her expertise in composing for strings.

TREEMONISHA: A Reimagining of Scott Joplin’s Ragtime Era Masterpiece
Like this? Login or register to make a playlist of your favorites pieces.
Features: Jessie Montgomery, Jannina Norpoth

This video provides an overview of the proposed project, Treemonisha. It includes footage of recent workshops, lists the collaborating artists, and provides background on the source material and current project.

This is a work for string quartet by Treemonisha co-composer Jessie Montgomery. It is performed by the Catalyst Quartet, of which she is also a member. The piece illustrates both her compelling musical imagination and her expertise in composing for strings.

This work sample represents the work of project co-composer Jannina Norpoth. The video is an excerpt from The Scheherazade Project, in a live performance at its premiere on June 6, 2016. The work is a rock and roll song cycle for indie band and string quartet, based on Scheherazade. Jannina Norpoth produced, orchestrated and co-wrote the work, performing a similar role to her work on Treemonisha. It illustrates her musical versatility and her work as a composer for theater/dance/multimedia.

Stanford Live (formerly Stanford Lively Arts) was founded in 1969, and has long been established as a major performing arts presenter in the San Francisco Bay Area. We present over 60 mainstage performances and 3 to 5 student matinees each season on the Stanford University campus featuring jazz, classical, and world music, dance, theater, and…