Getting to We Video and Future Plans

Posted on January 26, 2020 by Qubit
Like this? Login or register to make a playlist of your favorites pieces.

Qubit is excited to post an update to our New Music USA Awarded project with visiting French ensemble soundinitiative this past September, our mini-festival TRANSIENTS. In addition to New Music USA, the event was made possible by generous grants from the French American Cultural Exchange Foundation, Chashama, Yamaha Artists Services, and SPEDIDAM.

Two days of events featured work by young French and American artists. The festival’s second day brought work to New York by young French-based composers rarely heard here: Michelle Agnès Magalhaes, Raphaël Languillat, Louis D’Houdières, Pierre Jodlowski, and soundinitiative members Julia Robert and Joshua Hyde. The first day focused on soundinitiative’s interpretation of work by American composers, opening with a collaboration between Jessie Marino and Winnie Huang, and followed by Qubit members Aaron Einbond, David Bird, and Alec Hall who each wrote new works tailored to the specific strengths of the ensemble and performance space, creating an evening somewhere between sound installation, music theater, and multimedia performance. Aaron Einbond’s Attempt at Exhausting a Place transformed the performance space through field recordings that Einbond made in Paris, recasting Georges Perec’s descriptions of the city in 1974 as both familiar and distant today. David Bird’s work, How To, was a mashup of some of the most idiosyncratic how-to videos on the internet and YouTube in particular. The piece recombines audio and video from different how-to videos towards a surreal and uncanny effect. Alec Hall brought to life a series of (un)wellness products, life coaching strategies and community building exercises in Getting to We. Structured within an endless phone call to a corporate helpline, this immersive experience featured physical set pieces and clothing that Alec developed together with the artist MarieVic, as well as movement and dance choreography by KatieRose McLaughlin. We are delighted to share a video trailer of Getting to We, capturing the work’s dystopian lighting, ironic costumes, branded merchandise, and irresistible voice-over.

The next step for the project is an international exchange to produce the event in Paris on May 16th, 2020, thanks to travel funding from the French American Cultural Exchange Foundation and SPEDIDAM. Qubit members will travel to join the ensemble for an intensive residency at the Centre des arts d’Enghien just north of Central Paris. Together they will reimagine their site-sensitive works for the unique new space. This will be followed by a date in London at the City Summer Sounds Festival presenting a different program of Qubit collaborations. Stay tuned to https://qubitmusic.com for more on our first European tour!

Thank you soundinitiative and TRANSIENTS collaborators! 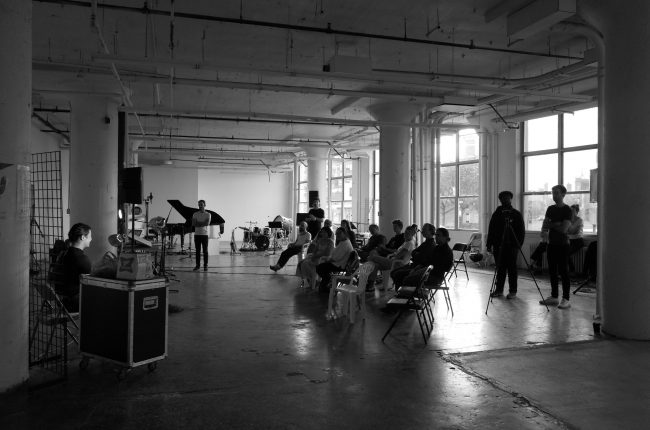 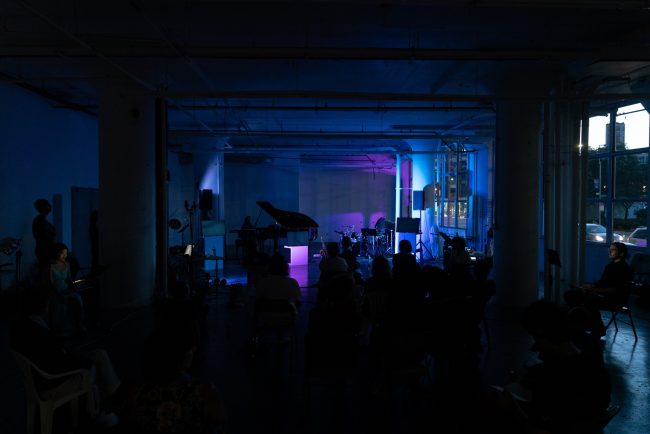 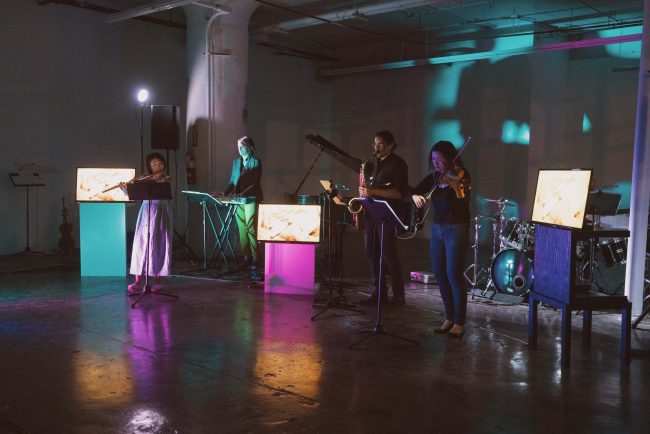 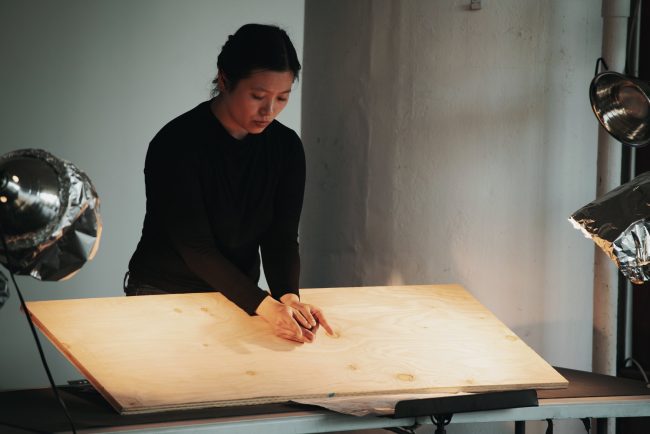 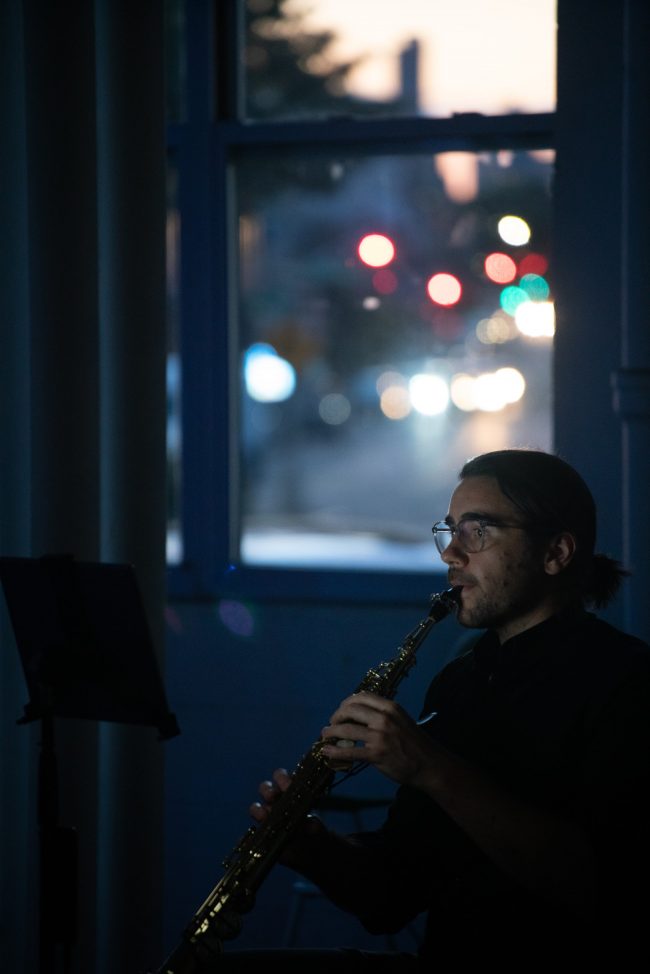 Qubit’s 10th season had a resounding start with the American debut of soundinitiative, the talented young French ensemble already making waves in Europe for their musical excellence as well as their fresh approach to curation, programming, and collaboration. Our intensely cooperative project was many months in the making with generous support from New Music USA, the French American Cultural Exchange Foundation, Chashama, Yamaha Artists Services, and SPEDIDAM.

Set over two days, we entitled our mini-festival TRANSIENTS, suggesting both the event’s focus on fine-tuned interactions of sound and space, as well as the participating artists’ peripatetic careers, each at home on several continents. The event began on September 7th with Jessie Marino’s and Winnie Huang’s  The Vanity of Small Differences, followed by GENUINE FAKE featuring world premieres of the three QUBIT composer-members: Attempt at Exhausting a Place by Aaron Einbond, How To by David Bird, and Getting to We by Alec Hall, co-created with the artist MarieVic.

Qubit’s season goes on with a gamut of music, media, and international visitors as varied as our group’s eclectic tastes: Lester St. Louis, and Alwyne Pritchard with the Alpaca Ensemble. By joining forces with fellow musical iconoclasts from near and far, we hope to challenge ourselves with new artistic synergies as well as perk up the ears of our New York audiences. Next up was cellist-composer Lester St. Louis, presented in our annual series Innovator Lab. Each year, Qubit selects early-career artists who defy classification into separate roles of composer, perfomer, improviser, or sound artist, but are united by their desire to use new interactive technologies intimately to engage with their audiences. A prime example is Lester St. Louis, who on September 16th gave his solo performance Transfer, Medium for cello, electronic sound, and lights, which he describes as “an invitation to the public to step into my Medium.” Then on September 22nd he invited MG, Teodora Stepančić, Joe Moffett, and Ben Stapp to join him for group performance MODA. All our September events were produced in the iconic Standard Motor Products building in Long Island City, in an expansive first-floor gallery space chosen in for its versatility and adaptability to our artists’ conceptions, as engaging visually and theatrically as musically.

Coming up next, Qubit presents the inimitable British-born, Norway-based vocalist, performer, and composer Alwynne Pritchard as she returns to New York this November. Performing together with the Norwegian Alpaca Ensemble, Pritchard will give the US premiere of a major new work, Black is the Colour (and I still hope). We hope to see you there on November 5that Areté Venue and Gallery in Greenpoint, Brooklyn.

For Qubit’s most ambitious project of the 2019-20 season, we have chosen to collaborate with French ensemble soundinitiative because—like Qubit—they are an organization whose work questions the traditional divisions of composer/performer/audience, instrument/electronics/multimedia, and concert/installation/theater. This project places these elements in the foreground by asking the musicians of both groups to collectively produce a multi-day event that is a performance, installation, and an immersive experience.

The festival takes place in the Standard Motor Products building at 37-18 Northern Boulevard, Long Island City, in a spacious first-floor gallery in the cultural heart of Queens near MoMA PS1, the Sculpture Center, and the Museum of the Moving Image. Acquired in partnership with Chashama, this location was chosen due to its expansive layout, location with easy access for members of the New Music community, and with video projection and multimedia running throughout the weekend, its ability to attract a high level of curious onlookers from those passing by the on the sidewalk.

Taking the form of a festival over two days (September 7-8, 2019), the project comprises three open-duration performative installations, and four concentrated concert events. Set throughout the expansive geographies of this converted bank, a core goal of the collaboration with soundinitiative is to produce the program in a non-traditional venue. Soundinitiative has a deep familiarity with installation-based and durationally non-specified works, and by building on Qubit’s experiences at Project-Q (a 6000-square foot venue we ran throughout 2018 in a former Harlem parking garage), this project will cohere into an inspiring and aesthetically powerful experience as audiences flow from one sonic situation to the next. Making its American debut, the project will be an important event for New York audiences to discover the voices of French composers Clara Maïda, Pierre Jodlowski, Julia Blondeau. Soundinitiative brings a studied technique of each of these important voices that are rarely heard on this side of the Atlantic, hopefully bringing together new musical communities not just from different countries but genres and disciplines as well.

Jessie Marino, ‘The Vanity of Small Differences’ for one performer

‘Fame’ for violist and new media

Lonelyhearts, by writer Kelsey Torstveit and composer David Bird, was part of Qubit’s 2018 event 21st-century Sound Stories, a site-specific, immersive music theater performance in collaboration with the TAK ensemble and director Joshua William Gelb. The proposed spaceinitiative project will build on the success of 21st-century Sound Stories, and give Qubit the opportunity to develop a collaboration with another vibrant young ensemble that also involves site-specific performance, and audience immersion, taking advantage of a unique venue.

Vertical Horizons
Like this? Login or register to make a playlist of your favorites pieces.
Features: ensemble soundinitiative

For amplified tenor saxophone, video, and electronics, composed and performed by Joshua Hyde, saxophonist and co-director of sounditiniative. Vertical Horizon is part of the proposed program spaceinitiative, and showcases the multiple talents of soundinitiative members as composer-performers, equally dedicated to delivering exceptional performances and bringing new site-specific multi-media work to their audiences. This work will fuse seamlessly with the other installations and performances on the program to create a dramatic two-day festival.

soundinitiative + :such:
Like this? Login or register to make a playlist of your favorites pieces.
Features: ensemble soundinitiative

A recent project by soundinitiative in collaboration with electronic artist :such: shows the ensemble’s talent for jumping off of the stage to reach out to the audience, electronic media, and the space around them to make the room come to life with a site-specific performance. Qubit’s proposed collaboration with soundinitiative seeks to electrify our two-day festival with similar approaches to site-specific performance, audience participation, and collective creation.

Qubit
Like this? Login or register to make a playlist of your favorites pieces.
Features: Qubit

Throughout 2018, Qubit ran a 6000-square foot multi-disciplinary art space in West Harlem called Project-Q. It produced dozens of experimental music performances as well as week-long residencies through our Innovator Lab program. Qubit brings together artists, musicians, thinkers, writers, poets, psychologists, architects, programmers, roboticists, and anyone else who contributes to creatively engaging the issues of the present, committing to imaginative solutions where no vision is too out-there, or no dream is too big to make real.

Alec Hall: The House of Influence
Like this? Login or register to make a playlist of your favorites pieces.
Features: Qubit, David Bird, Alec Hall, Aaron Einbond

An unnamed lobbyist purveys a stolen bioweapon on the cryptomarket before arriving at a social media celebrity house in Los Angeles, and finally at a Twitter Bot factory in regions unknown. The characters find themselves entangled amidst a widening morass of advertisements and social media, and as the lines blur between themselves and their surroundings, the lobbyist takes flight to alternative dimensions, spanning the physically discrete to the virtual, beyond the singularity and into the post-Human.

Qubit is a collective of composers and sound artists who curate and produce events that feature innovative applications of technology in music. Our principal mission is to foster the development of emergent voices by working with young composers and performers who have yet to reach wider audiences, and by exploring and developing new and experimental technologies…