Posted on September 4, 2019 by Garrett + Moulton Productions
Like this? Login or register to make a playlist of your favorites pieces.

“Garrett + Moulton Productions wowed us last Friday night. Their show packed the theater at Yerba Buena Center for the Arts; the audience left exhilarated. Forty performers, musicians and dancers poured energy forth at an aerobic level, as an antidote to the misery generated by the current state of affairs, and gave us, for two hours, surcease from the distractions, alarms, outrages of the state of the world.”

“They [the cast] took flight with a marriage of whimsy and expanse – fanciful jumps, angular postures and fluttery shoulders coupled with vast circular arms, huge barrel rolls and extended splits jumps. With its staccato runs and animal-like brass riffs (the trombone almost sounded like an elephant), Russell’s orchestral score had that same delicious duality.”

Through my early years of writing about dance, I developed an appreciation for small companies that had the resources to work with “live” music, rather than building a repertoire based on what was available on recordings….Last night my visit to the Blue Shield of California Theater at YBCA (Yerba Buena Center for the Arts) was my first opportunity to revisit a Garrett + Mouton Productions performance since 2013. I was delighted to see that the performance of music had the same priority. …Russell’s scores were high-energy compositions with their own unique approaches to repetitive structures (none of which showed any signs of trying to imitate Philip Glass). 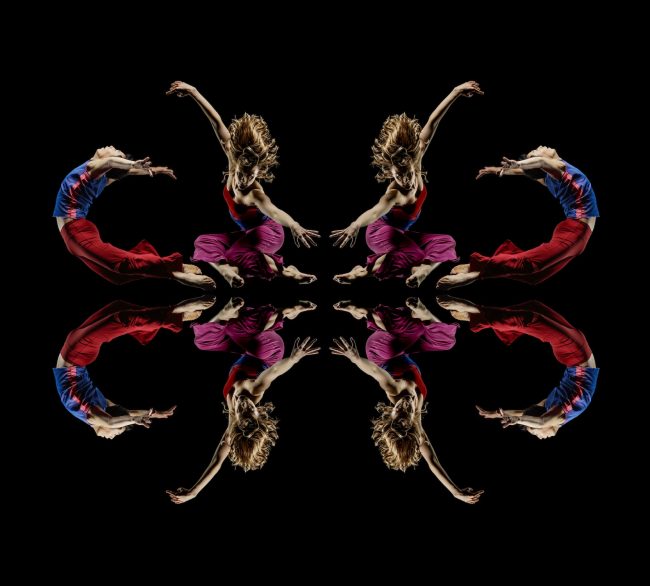 If your spirits need a lift, spend an evening with Garrett + Moulton Dance. The long-standing, award-winning San Francisco duo of Janice Garrett and Charles Moulton create modern dances that take the zeitgeist into account while always landing on the side of hope and unity, joy and optimism. A case in point is “Four Acts of Light and Wonder,” their summer season running Aug. 9-11 at Yerba Buena Center for the Arts.

Garrett’s world-premiere piece “The Over-Soul” takes its name from the Ralph Waldo Emerson poem and explores the human need for connection in the face of distance and struggle, while her “Gojubi” is a kinetic and colorful work for a dozen dancers. Former ODC/Dance artist Jeremy Smith joins the outstanding company dancers for “The Mozart,” an exuberant sextet accompanied by pianist Allegra Chapman. And it’s hard to top Moulton’s “Ball Passing” for sheer, gobsmacking wonder: In this iteration (since 1978, the work has been performed all over the world with casts from 9 to 3,000 people), 18 dancers and local folks will execute dizzying choreography that has them passing each other colorful balls left, right, up, down and sideways to the music of Jonathan Russell — it’s guaranteed to make you smile.

Announcing the opening of Four Acts of Light & Wonder!

TICKETS ARE ON SALE NOW

TICKETS ARE ON SALE NOW!

Purchase your tickets by going to http://www.CityBoxOffice.com/GMP

August 10th
Post-Performance Benefit Reception
Join the artists for a celebratory champagne and dessert reception. Purchase a benefit ticket that includes both the performance and reception.

Regular tickets that do not include the Benefit are also available for Saturday night’s performance.

Choreographers Janice Garrett and Charles Moulton are collaborating with Composer Jonathan Russell on a new large-scale, evening-length dance theater work, The Oversoul. Premiering in the Spring of 2019 at the 750-seat Yerba Buena Center for the Arts Theater in San Francisco, this production will engage a cast of 49 performers and will feature an original score composed by Jonathan Russell, who has worked previously with Garrett and Moulton on four productions, including Speak, Angels which was supported by New Music USA in 2016.

The Oversoul will explore Ralph Waldo Emerson’s concept of the life force which animates and connects all living beings. It will include Garrett + Moulton Productions’ twelve company dancers, an ensemble of ten musicians, and a corps of 27 performers in a “movement choir”—a theatrical form utilized by Garrett and Moulton in four previous productions: Speak, Angels (2016); The Luminous Edge (2014); The Experience of Flight in Dreams (2011); and The Illustrated Book of Invisible Stories (2009). By its nature and size, the movement choir communicates a sense of collective human experience. It is a powerful group form that is a vital and central component of Garrett and Moulton’s work, enabling them to articulate and express the humanistic themes that motivate and inspire them. In The Oversoul, they will assemble their largest-ever cast as they deepen their exploration of the movement choir and examine themes of cooperation, connection and interdependence.

Over their 10-year partnership, Garrett and Moulton have made seven full-length pieces that explore the joys, sorrows, dilemmas and complexities of human experience. They share a profound interest in working with groups and have 60 years of combined experience leading groups of both dancers and non-dancers in a wide range of projects that reflect their passion for bringing people together. In their large-scale productions, they have discovered that a group of strangers from widely different backgrounds can become a collective body with a unified voice working energetically towards a common goal. Their intention in creating The Oversoul is to construct a work of art that engenders a profound sense of belonging to something larger than our individual selves. It is a project deeply aligned with Garrett + Moulton Productions’ mission to create large-scale performances that celebrate our shared humanity and serve as a potent medium of community building and transformation.

A hallmark of Garrett and Moulton’s work is their dedication to live music. In The Oversoul they will further this commitment by engaging long-time collaborator Jonathan Russell to create an original score for the piece. Russell will also serve as the project’s Musical Director—selecting an ensemble of musicians, leading music rehearsals, and conducting the musicians in the final performances. As a key collaborator on four previous Garrett + Moulton Productions’ projects, Russell has been instrumental in supporting and amplifying the choreographers’ artistic vision. Together, they have developed a dynamic music/dance vocabulary that they are eager to expand upon. The Oversoul is an ideal project to nurture and support their vibrant creative dialogue.

This excerpt is from Garrett + Moulton’s evening-length production “Speak, Angels,” which was funded by New Music USA. It features 6 company members, an 18-person movement choir, and live music: illustrating the artistry of the dancers, the movement choir, and the music ensemble all performing together in a high-energy, dynamic section of choreography. It also demonstrates the quality of work by proposed collaborator Jonathan Russell who performed, arranged, and conducted the music from Movement VII of Marc Mellits’ “Prometheus.”

This is Garrett + Moulton’s largest and most recent “ball passing” piece choreographed by Co-Artistic Director Charles Moulton in collaboration with Janice Garrett. This work sample demonstrates the large-scale nature of our proposed work and provides a view into the quality and scope of the massive 72-person movement choir that we envision for “The Oversoul.” The music heard on this sample is by composer Matthew Pierce.

This excerpt from Garrett + Moulton Productions’ “Speak, Angels” features two pieces by Jonathan Russell, “You Are Here”and “Light Cathedral.””Light Cathedral” was originally a 25-minute chamber orchestra work commissioned by Baltimore’s “Symphony Number One” and premiered in March 2016. This excerpt was arranged by Russell for two clarinets, violin, two cellos, and piano. It exemplifies Jonathan’s capacity to compose and arrange for Garrett + Moulton Productions, and of the contemplative, emotionally direct quality of much of his recent work.

Garrett + Moulton Productions is a San Francisco based performing arts organization that is co-directed by choreographers Janice Garrett and Charles Moulton. Dedicated to the presentation of live performances of dance and music, the company produces an annual home season, tours internationally, and offers engaging educational programs locally, throughout the US, and abroad. The company…