Posted on February 6, 2019 by Joseph Bertolozzi

It’s exciting that so many young musicians were introduced to my music. Thank you again Terry Longshore, Artistic Director…and thank you New Music USA!

Video of the Live Performance of “Tower Music Percussion 5tet” from Nov 8, 2018

Posted on November 28, 2018 by Joseph Bertolozzi
Like this? Login or register to make a playlist of your favorites pieces.

A concert film is being edited as we speak, but til then you can enjoy the archived live stream from YouTube here:

“A Towering Achievement in Sound”

Posted on November 15, 2018 by Joseph Bertolozzi

That’s the review headline from the successful premiere on Nov. 8 of Tower Music 5tet at Southern Oregon University.

Performed by Left Edge Percussion under the direction of Dr. Terry Longshore, the evening’s offerings included:

– introductory remarks by the composer

Here’s a link to the whole article: “A Towering Achievement in Sound”

Thanks to New Music USA for their assistance with this project.

Premiering one month from today!

Posted on October 1, 2018 by Joseph Bertolozzi

Posted on September 14, 2018 by Joseph Bertolozzi

Here’s a few backstage pix of the preparations for the premiere of my TOWER MUSIC PERCUSSION QUINTET. Terry Longshore directs Left Edge Percusion at Southern Oregon University.
Drummer Reed Bentley sits at his kit with myriad cymbals, an extra snare, large Roto Tom, wood blocks and his iPad from which to follow the music.
In the second picture we see some of the other instruments to be used (out of 82!). You’ll see a tam tam (the large gong), Thai gongs, a mounted afuche/cabasa, bass drum w/mounted cymbal, a snare, wood blocks, shaker, cowbell, and a covered vibraphone (I think…it’s covered, LOL!)

Posted on September 6, 2018 by Joseph Bertolozzi

Rehearsals for my #TowerMusic percussion quintet officially begin Sep. 24, the first day of classes at Southern Oregon State University. Percussionist extraordinaire Terry Longshore will lead his team into the maze of my music for its November premiere. Practicing is underway! Good luck everybody!

Dr. Terry Longshore will lead Left Edge Percussion, a contemporary percussion group in residence at the Oregon Center for the Arts at Southern Oregon University, Ashland in the premiere of my percussion arrangement of Tower Music. This grant will go toward extracting the parts from the full score so each member of the ensemble will be able to read their own part on tablet computers.

The work features 82 Percussion instruments played by five performers and will be premiered November 8, 2018 in Ashland, OR. Future plans for recording it, which would further disseminate the work, are under consideration by Dr. Longshore.

The idea behind Tower Music grew out of my Bronze Collection project for solo percussion (video clip here). Everything vibrates and drummers like to bang on things! Why not play the Eiffel Tower? Never thinking I would get permission to do so but liking the concept, I pursued the New York State Bridge Authority to create Bridge Music on the Mid Hudson Bridge over the Hudson River (I didn’t think I’d get permission for that either, but at least I didn’t have to learn French just to ask!). Bridge Music is now in its 9th year as a public sound art installation.

Using Bridge Music as a proof of concept, I approached the French government (six times!) and received permission to sample the surfaces of the Eiffel Tower. Seven years of planning, fundraising and sweat later, Tower Music became a reality, reaching  #11 and #16 respectively on the iTunes Classical and Billboard Classical Crossover charts.

The score for Tower Music on the Eiffel Tower itself is written out in standard notation so it can be performed live by c. 100 percussionists, its intended objective; a live performance directly upon the Eiffel Tower is currently in development for the 2024 Paris Olympics, but is far from a “done deal” at this point. The audio files of the music are electronically realized “studio” versions of the music played back by Finale Music Notation linked to the samples.

The arrangement faithfully reproduces the music within the context of a percussion 5tet, i.e.: cymbals standing in for fence crashes, bass drums for booms on the Tower legs with a log, glockenspiel for pings on a pipe, etc.

This arrangement is important to me as it will bring live performances of the work into the concert hall, since live performances on the Eiffel Tower itself will be an extremely rare (if ever) event . It gives longevity and presence to the music by allowing live audiences to enjoy live performances in an authentic, composer-created arrangment.

A THOUSAND FEET OF SOUND-Tower Music/Musique de la Tour-Bertolozzi-OFFICIAL VIDEO
Like this? Login or register to make a playlist of your favorites pieces.
Features: Joseph Bertolozzi

This video uses the 1st movement from Tower Music as a soundtrack/backdrop to showing the process of my sampling the Eiffel Tower in 2013. The music you’re hearing comes directly from these sessions.

A live performance on the Eiffel Tower would look and sound like this while my percussion 5tet replicates the music using standard percussion instruments so that audiences can enjoy the music played live in a concert hall, a far more likely event than travelling to Paris for a performance which may only happen once (if ever).

CONTINUUM
Like this? Login or register to make a playlist of your favorites pieces.
Features: Joseph Bertolozzi

This excerpt of “Tower Music” is my studio realization from samples recorded directly from the surfaces of the Eiffel Tower in 2013. It corresponds to the as-yet unrecorded percussion 5tet arrangement of this same piece.

The work melds Gamelan motifs with Minimalism, representing pertinent historical & present day musical traditions: the gamelan was introduced to the West during the 1889 World’s Exposition for which the Eiffel Tower was built. The music exhibits a wide variety of colors & rhythm.

STRINGS ATTACHED
Like this? Login or register to make a playlist of your favorites pieces.
Features: Terry Longshore

This concert video from 2016 presents my collaborators Left Edge Percussion, Terry Longshore, Artistic Director, playing “Strings Attached” by Erik Griswold. I chose it to showcase the breadth and level of artistry in their mission to bring cutting edge music to the public.

About the Piece:
Six drummers surround a central pole. Their sticks are tethered to the pole, or in some cases to each other, by means of lightweight white nylon rope. Movements in the rope, therefore, reflect each movement of the sticks. 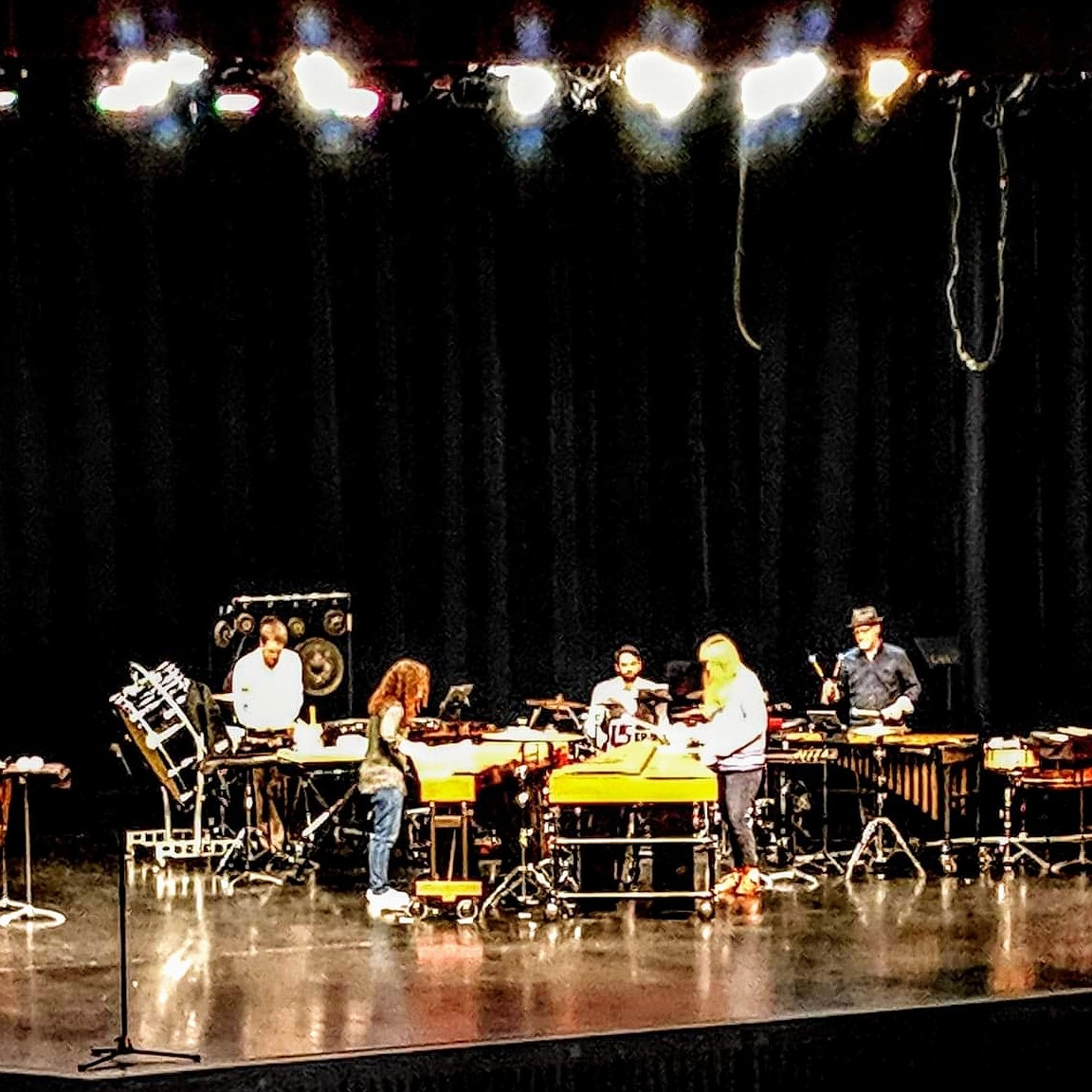 American composer Joseph Bertolozzi forges a unique identity as a 21st century musician with works ranging from solo gongs to full symphony orchestra to architectural music installations. With increasingly numerous performances across the US and Europe to his credit, his music is performed in concert halls and conservatories, and he himself has played at such diverse…