The next trip to Vicksburg for Eve and Karen has been set for May 19-30 2018. In working on the first songs for the song circle, we realized that we had to go deeper with our research. We need more time to work with the community before the actual workshop. Our next trip will include meetings with our main local contacts, finalizing plans for a work-in-progress showing in Vicksburg in Fall 2018. We will also start conversations with musicians from the area, and on the way to Vicksburg audition a violinist in New Orleans.

In the meantime, we spent a good amount of time in a self-imposed residency in Eve’s studio in Vermont. In March we dedicated a whole week on refining one of the songs “Albert’s Confession,” and developing the other songs further.  We did however realize that we do need a director or a dramaturge to help us shape the work, so we are currently interviewing candidates to join our creative team.

It is important for us that the workshop showing in the fall in Vicksburg will include discussions with the local community. This feedback will be worked into the piece for its world premiere at the Strand Theater in Vicksburg in November 2019, exactly 10 years after Eve’s first visit, and the New York premiere at Mabou Mines Theater in spring 2020.

Our current plan is to make another trip south in early 2018, and probably again in March, in preparation for a workshop presentation at the Strand Theatre in Vicksburg in May of 2018. There will be a further development workshop at the Mabou Mines theater in New York City during the 2018/19 season.

Posted on October 28, 2017 by Mabou Mines
Karen and Eve spent a month in Vicksburg this spring researching the Vicksburg Project and meeting with residents who are giving us perspective and background to shape the piece. Our videographer Matt Petty also joined us for a few days. Most of our time was spent building and deepening relationships with people in Vicksburg.
Our most important source and confidante is Yolande Robbins, a retired teacher who is the founder of the Jacqueline House, the African-American Museum of Vicksburg. https://jacquelinehouse.weebly.com/
Eve also met with Gordon Cotton, the emeritus director of the Old Courthouse Museum in Vicksburg, who edited the diary of Emilie Riley McKinley, which is forming the basis for some of our work. https://oldcourthouse.org/
Karen and Eve and Matt spent time at St. Alban’s Episcopal Church in Bovina, http://www.stalbansbovina.org/, where the Rector, Billie Abraham, and the Deacon, Josie Williams, were generous and openhearted in sharing the history of the area, which abuts the former Batchelor Plantation, where Emilie Riley McKinley lived and worked as a governess during the Civl War. Her charges are buried in the churchyard.
We are focussing right now on the first three songs of the cycle, based on women’s experiences during the Civil War. The diary reflects experiences of both free and enslaved people during those times.
Back north for the summer, Karen and Eve continued their research and study, and are now in mid-October beginning to write the words and music for the first three songs that will comprise the piece. We are beginning to identify performers for the work, from New York, New Orleans, and hopefully, Vicksburg itself.

Composer Eve Beglarian and writer and Mabou Mines Co-Artistic Director Karen Kandel will conceive a staged song cycle of twelve interlocking musical pieces that trace women’s experiences in Vicksburg, Mississippi during four different historic eras: the Civil War 1860s, the Jim Crow/Great Migration 1910s, the Civil Rights 1960s, and the current decade. The project will be developed/workshopped in both Vicksburg and New York with the premiere planned for the 2018/2019 season at Mabou Mines new theater. Mabou Mines is an artist-driven experimental theater collective, founded in 1970, generating original works and re-imagined adaptations of classics. Work is created through multi-disciplinary, technologically inventive collaborations in an extended development process.

The inspiration for the project began when Eve, a long time Mabou Mines collaborator, visited Vicksburg while traveling the length of the Mississippi River by kayak and bicycle during summer/fall of 2009. At the Military Park in Vicksburg, she came across journals kept by Confederate women who moved their households, including their slaves, into caves outside the town of during the siege. During her research, she discovered Albert Cashier, a soldier from Illinois, who served at Vicksburg and many other campaigns during the Civil War was revealed to be a woman. She also learned that scat singing was invented in Vicksburg in the early years of the 20th century.

These powerful documentary fragments coalesced into the song cycle idea with Karen, centering on the history of Vicksburg, a small but deeply significant town pivotal to the painful history of our country. The conceptual framework will use intense snapshots of women’s lives spanning 150 years of history in 50-year increments.

Karen visited Vicksburg for the first time with Eve in March of 2016, and together they have begun to address the questions that the seemingly immutable categories of North and South, male and female, black and white raise for us. Over repeated visits, Eve and Karen have met many residents of Vicksburg, building relationships and discovering hidden stories. Because Vicksburg is such a potent symbol of the agony of slavery and Civil War, it is also a place where keys to healing and reconciliation might possibly be forged.

Together Karen and Eve will collaborate on text and lyrics for the song cycle both in NYC and in Vicksburg. The text will be built from their research as well as their personal experiences of Vicksburg as (black and white, straight and gay) women. Video designer Matt Petty will create video as part of the live performance.

The grant period will also be used to put together the small ensemble of singers and musicians for workshops at Mabou Mines theater in NYC and at the Strand Theatre in Vicksburg.  While the instrumentation is still to be determined, we envision a combination of local, New Orleans, and NYC musicians, and are aiming for an all-woman band.

We are seeking support at this early phase of the project to support a long-term research and development phase in the Vicksburg community for an ambitious project.

Light Up Your Face
Like this? Login or register to make a playlist of your favorites pieces.
Features: Eve Beglarian, Matt Petty

In Memory of James Craig Anderson and Medgar Evers.

Live performance by loadbang with Eve Beglarian and guests. Text by Eudora Welty. Footage from The Metro Inn in Jackson, MS – the site of the murder of James Craig Anderson on June 26, 2011 with video by Matt Petty. Additional footage from the home of Medgar Evers with video by Bradley Wester.

please visit http://evbvd.com/lightup/ to understand why I set church music against the voice of the murderer.

On the Battlefield
Like this? Login or register to make a playlist of your favorites pieces.
Features: Eve Beglarian, Matt Petty

On the Battlefield was inspired by the memory of a visit I made to the Vicksburg National Military Park during my journey down the Mississippi River in 2009.

The November afternoon I was there, I ended up in a miserable long-distance phone argument with my then-lover in Athens. The site of one of the iconic struggles of the war between the states felt entirely personal and intimate to me that afternoon.

Matt Petty’s trombone improvisation is fed through live electronic processing. Matt also made the video that accompanies the piece.

This work sample is excerpted from a larger series that focuses on the inner life of women. PORTRAITS is the overall working title. This excerpt is intended to be accompanied by a live, new jazz composition with lots of saxophone and bass. In a work-in-progress presentation, Karen used the music of Billy Strayhorn for inspiration.

Mabou Mines is an artist-driven experimental theater collective, generating original works and re-imagined adaptations of classics. Work is created through multi-disciplinary, technologically inventive collaborations among its members and a wide world of contemporary filmmakers, composers, writers, musicians, choreographers, puppeteers and visual artists. Since 1970, Mabou Mines has created more than 100 works, including “The Lost… 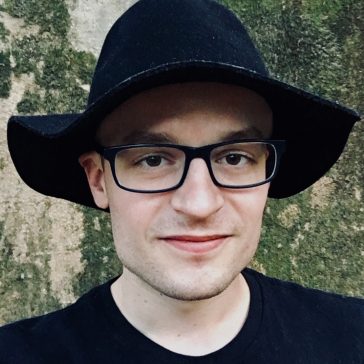