Posted on September 17, 2019 by Cassidy Chey
Like this? Login or register to make a playlist of your favorites pieces. 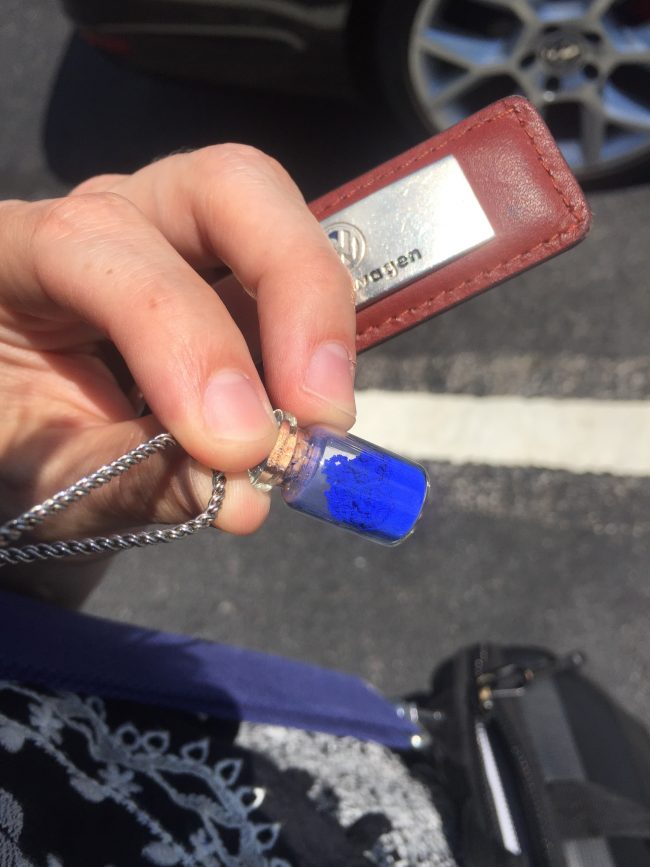 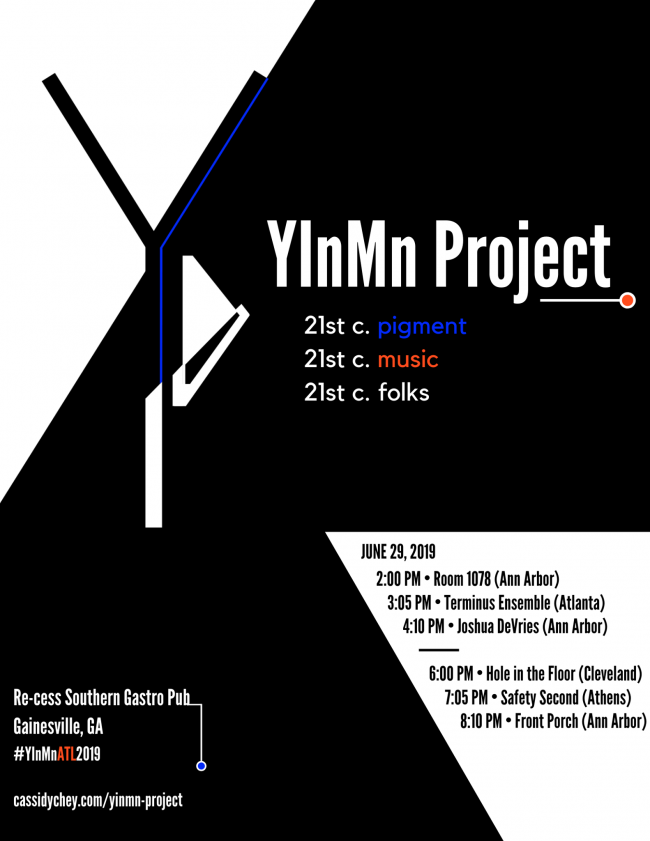 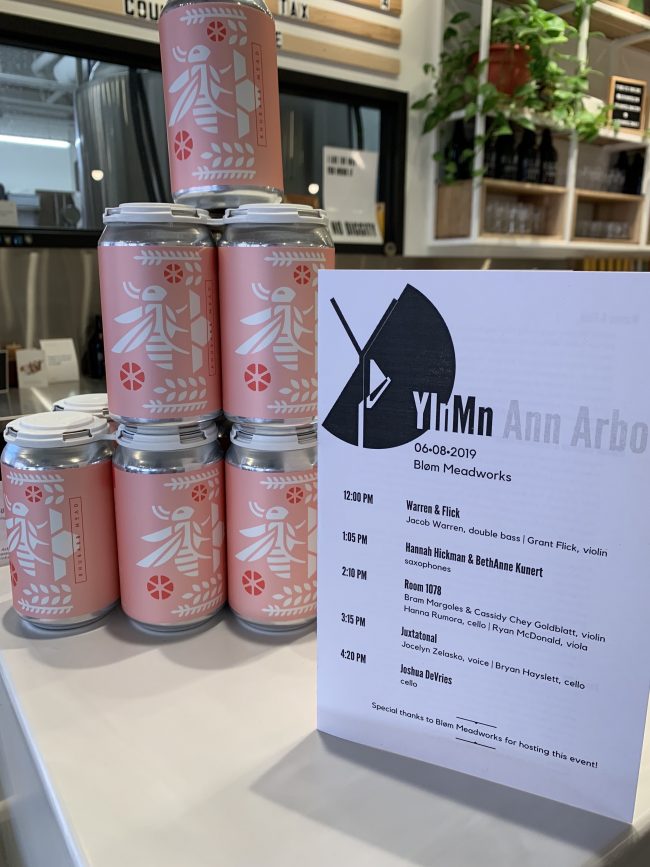 First off, can we just say, “WOW!!” We’re absolutely thrilled and beyond honored to be receiving support from New Music USA, and we’re so excited to officially be joining the community here. Thank you!

To kick things off, let us give you an update on how YInMn 2019 played out. It was a thrilling season with several unexpected turns of events; check out the highlights below:

• YInMn Atlanta made its second annual appearance on June 29 at Recess Southern Gastro-Pub.
• YInMn Ann Arbor made its DEBUT on June 8 at Bløm Meadworks.
• All together, YInMn 2019 featured 25 performers and about 12 hrs of music.

• Nora Venturelli, Ann Arbor-based artist and instructor at UofM, joined YInMn AA to “paint her take” (live) of the music she heard.  This was our first year featuring live art-making.
• Mas Subramanian, inventor of YInMn Blue, reached out to us after discovering the project this winter and has since become an incredibly inspiring supporter. He even sent a sample of YInMn Blue powder for us to showcase at YInMn ATL! Check out the photo below.
• Improvisation also made its first official appearance at YInMn ATL this year. We expected everyone would appreciate a break mid-day, so we included a free-improv set open to all YInMn performers. The musicians had some breathtaking moments and made some incredible connections across ensembles, and even audience members wanted to participate!

We’re so grateful to our performers this year for their energy, dedication, and incredible musicianship; to our hosts for providing such unique spaces for us to create in; and to our audiences for being willing to jump outside the box and experience some of the many artistic voices of our own time and culture. And we are beyond grateful to New Music USA for welcoming us in to this community and making it possible for us to build this project.

What exactly is “new music”? Ask ten people and you’ll probably get ten answers, because everyone has a different opinion on what constitutes contemporary classical music these days—in all honesty, many have no idea it exists at all.

The fact is that, regardless of stylistic differences, present-day “new music” is influenced by 21st-century culture, whether that reflect technological developments, multiculturalism, or an interest in blending past traditions. The YInMn (or “in-min”) Project showcases the breadth of styles new music can constitute, bringing awareness of contemporary classical music to new audiences through interactive, intimate, and visually oriented festival experiences. The project harkens back to its namesake—YInMn Blue—a newly discovered pigment whose arresting, vivid color has an effect not unlike the bright timbre, striking quality, and thrilling nature of so much contemporary music.

Founded in Atlanta in 2018, the YInMn Project has a twofold mission: first, to craft annual, day-long new-music festivals in unsaturated cities, using so intimate and engaging a design, so broad and relatable a mix of musical styles, that these events might be accessible to the most and least exposed of a city’s residents, whether those be composers, young suburban families, or kids from underprivileged areas; and second, to develop those cities’ existing new-music scenes, expanding local groups’ audience base while allowing them to develop relationships with professional new-music ensembles from outside their region.

The inaugural YInMn Project featured six groups from Atlanta, Athens, Ann Arbor, Detroit, and New York and was hosted by Whitespace Gallery, a contemporary art gallery in the walkable heart of Atlanta. The half-day event engaged the visual as much as the aural and was a rousing success with musicians, hosts, and audience members, even receiving a positive review from ArtsATL’s Mark Gresham. This year YInMn Atlanta is returning to Whitespace, and we are ecstatic to be featuring eight ensembles hailing from Detroit, New York, Boston, Ann Arbor, Cleveland, Athens, and Atlanta. From a cello quartet to a guzheng-violin duo to a solo cellist commissioning five works specifically for YInMn, this year’s sets will showcase thrilling musical variety, including improvised, electro-acoustic, folk, and avant-garde works along with semi-improvised “story songs.”

In 2019 YInMn is also expanding to Ann Arbor, MI, where this city’s inaugural festival will be hosted by Bløm Meadworks and include live painting by local visual artists. Five of this event’s six programmed ensembles will also be performing at YInMn Atlanta, allowing these participants to establish deeper camaraderie with the potential to develop long-term collaborative relationships.

At its heart, YInMn is about inspiring individuals and building community: it’s about motivating young musicians to explore new avenues of performance; allowing music-lovers to discover fresh, invigorating modes of listening; and ultimately reducing barriers between art-lovers and art-creators. We’re thrilled to see the positive response YInMn has had so far, and we hope to see this project inspire active, bubbling, and approachable new-music scenes in regions whose communities currently have limited exposure to contemporary classical music, starting with Atlanta and expanding beyond.

Cajón (2016) | Nina Shekhar, performed by Joshua DeVries
Like this? Login or register to make a playlist of your favorites pieces.

A performer in YInMn 2018, Joshua DeVries will return to both YInMn Atlanta and YInMn Ann Arbor in 2019. His planned solo set explores how the Block Strap allows cellists to engage more interactively with collaborators and audience members and will include five works commissioned for the YInMn Project. The commissioned composers represent backgrounds in Iranian folk and classical, contemporary rock / metal, and Avant Garde singing among others, and their work will be paired with standards like Saariaho’s Sept Papillons and John Zorn’s Maspiel.

Tata Made for Jumping Cow (2018) | Cassidy Goldblatt & Muqi Li
Like this? Login or register to make a playlist of your favorites pieces.
Features: Cassidy Chey

The first of Cassidy’s and Muqi’s “story songs,” Tata Made for Jumping Cow is a verbally scripted, musically improvised piece based on one of Cassidy’s childhood adventures. Cassidy (violin, voice) and Muqi (guzheng, voice) are a Boston-based duo exploring the reach of combined vocal and instrumental improvisation and its ability to tell stories, integrating Bulgarian, Japanese, Chinese, and European Renaissance singing styles with their respective instrumental voices. They will be joining YInMn 2019 in Atlanta and Ann Arbor.

#nofilter (2016) | McQuade Dewhirst, performed by Juxtatonal
Like this? Login or register to make a playlist of your favorites pieces.

Another YInMn 2018 participant, Detroit- and New York-based duo Juxtatonal [JUX] melds music, art, and theatre to create intensely engaging shows that welcome audiences as participants in the creative process. They will be bringing YInMn 2019 (Atl and AA) selections from their recent commissioning project, “To Be or Not To Be (Relevant)?,” a set of fourteen commissions exploring artistic relevance in today’s society. JUX aims to engage YInMn audiences this year with a playful but sincere exploration of this relevance through new music.

Creativity, whether innate or learned, is inescapably a part of how humans engage with the world. We use creativity in song, the written word, visual art… but we also wield it each time we problem-solve, navigate relationships, or plan to reach a goal. The world is a fascinating place, after all, and grappling with it—living…